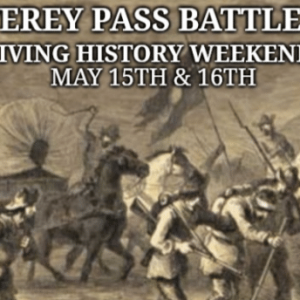 Join Monterey Pass Battlefield on May 15-16 for Infantry and Artillery demonstrations daily by the 2nd Maryland Artillery and 2nd Maryland Infantry Co. D, who maintain the traditions of the “Independent Greys” * of the Civil War. Modern day Independent Greys are “living history campaigners” who teach about Confederate Marylanders’ roles in the Civil War. They strive to re-create the best impressions of Marylanders possible based on research and documentation. In addition, we’ll be joined by John Galie, resident Monterey Pass battlefield guide, who will conduct walking tours of the battlefield.

The name “Independent Greys” was used by several Maryland Militia infantry companies that formed a battalion within the 53rd Maryland Militia Regiment from 1859-1861. Shortly after the Baltimore Riot on April 19, 1861, it was clear Maryland would not secede. Most “53rd” members being pro “South”, the unit dissolved. Many went to Virginia to serve. Over 25,000 Marylanders served in the Confederate Army and found themselves serving in Virginia Regiments since Maryland, as a state, never seceded. Some of these units were known as Independent Greys. The 2nd MD Artillery, also known as the Baltimore Light Artillery, served in the Army of Northern VA primarily with Cavalry units until the end of the war.