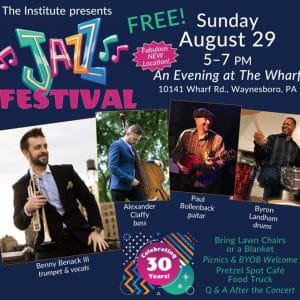 The Institute’s 30th anniversary Jazz Festival is scheduled for Sunday, August 29, from 5 to 7 p.m. at The Wharf, a rural, park-like property at 10141 Wharf Road in Waynesboro, Pa.

The concert is offered free to the public. In case of rain, the concert will take place at an indoor area at the same location.

In 2020, when audience capacity needed to be limited, the Jazz Fest concert was live-streamed around the world.

“After last year, we really wanted to do something special to mark the auspicious milestone of our 30th anniversary, while also looking to the future with great anticipation and excitement,” noted event founder Andrew Sussman.

“Thus, we are moving to a NEW location, a NEW time, and featuring some of the hottest young musicians in jazz,” Sussman said. “I believe Benny Benack and Alexander Claffy are both major talents and are going to be big stars in the jazz world. And we are thrilled to have jazz masters Paul Bollenback and Byron Landham back to round out this incredible quartet!”

To add to the celebration this year, the Pretzel Spot Café food truck will be on site and BYOB will be permitted.

Benny Benack III has proven to be a rare talent: not only a fiery trumpet player with a stirring command of the postbop trumpet vernacular, but also a singer with a sly, mature, naturally expressive delivery in the post-Sinatra mold, performing standards and his own astute songs with a thrilling sense of showmanship. His superb intonation and bracing virtuosity enable him to handle astounding feats of vocalese (complex solos with written lyrics). And he’s a highly capable pianist as well.

Benack has performed widely as a front man for Postmodern Jukebox and played and recorded with Christian McBride, Josh Groban, Diplo/Major Lazer, Emmet Cohen, Ben Folds, Ann Hampton Callaway, Melissa Errico, and many more. He’s been featured at jazz festivals and clubs around the world, won or was a finalist in several prestigious competitions (including the Thelonious Monk and Carmine Caruso Trumpet Competitions) and is highly sought after as a clinician and educator, leading workshops and panels for jazz at Lincoln Center’s Jazz for Young People program and the New York Youth Symphony’s Education department.

Third in a generational line of Pittsburgh jazz notables, Benack follows in the footsteps of his trumpeter/bandleader grandfather, Benny Benack, Sr., and his father Benny Benack, Jr., a saxophonist/clarinetist who gave the young Benny his first professional experience. (Benny, Sr. recorded the Pittsburgh Pirates’ 1960 theme song, “Beat ’Em Bucs” and toured with Tommy Dorsey and Raymond Scott, among others.)

Benack’s latest album, “A Lot of Livin’ to Do,” was released in 2020 and features bassist extraordinaire Christian McBride, drummer/producer Ulysses Owens, Jr., and Takeshi Ohbayashi on piano and Rhodes.

Paul Bollenback started his music career in 1981, and has performed with a wide range of jazz luminaries, including artists as diverse as Stanley Turrentine, Jeff “Tain” Watts, Steve Gadd, Gary Bartz, David “Fathead” Newman, Terri-Lyne Carrington, Joe Locke, Jack McDuff, James Moody, Jim Snidero, Charlie Byrd, Herb Ellis, Paul Bley, Geoffrey Keezer, Mike LeDonne, Carol Sloane, Gary Thomas, Grady Tate, and in the group East Meets Jazz with the renowned tabla virtuoso Sandip Burman, to name just a few. He is known for his versatility, and also for an influential 20-year stint with jazz organist Joey DeFrancesco. Bollenback performed on over 80 recordings as a sideman, and has released eight CDs as a leader. A busy performance schedule has been augmented since the late ’90s by steady jazz education duties at Columbia University, Queens College, and The New School. Bollenback is also a composer, whose pieces have appeared on Joey DeFrancesco’s “Reboppin’” and on the “Jazz Times Superband” CD. His most recent recording is “Portraits in Space and Time.”

Alexander Claffy is currently one of the most in-demand bass players in New York. Since moving there from Philadelphia in 2011, he has worked with a long list of musicians including Wallace Roney, Christian Scott, Louis Hayes, Harold Mabern, Russell Malone, Jimmy Cobb, Louis Hayes, Joey Alexander, and Johnny O’Neal. He’s recorded three albums as a leader including his most recent, “Claffy II.” His father, Joseph Claffy is a notable society bandleader in the Philadelphia area. Claffy also appeared on the first three seasons of the Nickelodeon show, “Blue’s Clues.”

Support for this event was provided by a grant from the Pennsylvania Council on the Arts, a state agency funded by the Commonwealth of Pennsylvania and the National Endowment for the Arts, a federal agency. Further sponsors include The Hamilton Family Foundation on behalf of Hamilton Nissan and Hamilton Hyundai, Andrew and Sally Sussman, the Franklin County Visitors Bureau, Stephen D. Fisher, and The Institute’s Today’s Horizon Fund contributors: The Nora Roberts Foundation; the John R. Hershey Jr. and Anna L. Hershey Family Foundation; APX Enclosures, Inc.; The Carolyn Terry Eddy Family: Carolyn, with daughters Connie Fleagle & Kim Larkin. Facility support provided courtesy of Jeff and Nancy Mace.

Parking is available on the property. Those attending are encouraged to bring lawn chairs and blankets, and picnics are welcome. As in the past, cold water will be available free to all attendees.

For more information call The Institute at 717-762-0373, or visit www.natureandcultureinstitute.org.