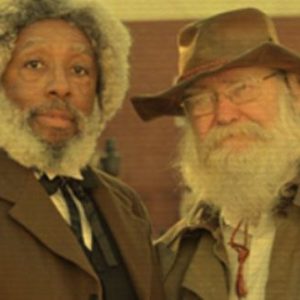 In-Person or via ZOOM

On May 8, the African American History Association of Western Maryland brings A Conversation between Frederick Douglass and John Brown to the Franklin County 11/30 Visitors Center, on the square in downtown Chambersburg.

Chambersburg is an apt location because abolitionists Douglass and Brown met in Chambersburg on August 19-21, 1859 to discuss Brown’s plan to takeover of the arsenal at Harper’s Ferry.

Throughout the spring and summer of 1859, Brown and his raiders made the Mary Ritner Boarding House on King Street in Chambersburg their northern headquarters.

Today, the Ritner Boarding House sits in a working-class family neighborhood, just as it did in the summer of 1859.

The presentation is offered with limited in-person seating in the second-floor Great Room of the 11/30 Visitors Center and on Zoom.

Tickets to both are a $5 dollar donation. As an added bonus, the 11/30 Visitors Center is hosting Edna Lawrence’s An African American Women’s Quilt Exhibit.

Franklin County Visitors Bureau focuses on the service of the USCT (U.S. Colored Troops) and Buffalo soldiers as America commemorates Black History Month. In July 1862, when the United States Congress passed the Confiscation Act and the Militia Act, the law emancipated slaves of the Confederacy in Union-controlled territory and allowed “persons of African descent” to participate in the military and the navy. The Militia Act was a first step to removing the limitations on people of color to serve in times of conflict.

Henry Watson, an African American barber in Chambersburg, served in the 29th Connecticut Volunteer Infantry, Company E, as a private. His Chambersburg barber shop was less than a block west of the square on Route 30. Watson helped to organize the meeting of Frederick Douglass and John Brown on August 19, 1859, prior to Brown’s Raid on Harper’s Ferry in October. Notably, Douglass was key in convincing Abraham Lincoln to allow people of color to serve and also recruited men to serve in the USCT. The 29th Connecticut mustered in March 8, 1864 and mustered out November 25, 1865. Watson died on May 20, 1898 and is buried in Mount Vernon/Mount Lebanon Cemetery in Chambersburg, which is the final resting place of twenty-six USCT.

Wesley Krunkleton was a farmer, born in Welsh Run near Mercersburg in 1839. Krunkleton enlisted in May 1863 and became a member of 54th Massachusetts Volunteer Infantry, Company K. Krunkleton was significantly wounded above the knee during the Battle of Grimball’s Landing in South Carolina in July 1863. He was discharged in August 1865 and received a pension for his disability. He died on October 31, 1902 and is buried in the Zion Union Cemetery in Mercersburg. Zion Union Cemetery contains thirty-six USCT veterans.

With the Militia Act of 1862, the door to military service was opened for African American citizens, and Congress passed the Civil Rights Act of 1866, ensuring the same rights to male citizens regardless of race. This provided for peacetime enlistment of all races in the military. Franklin County native Emanuel Alonza Miller enlisted on April 29, 1899 and joined the 9th Cavalry, which was one of the original regiments of U.S. Army for African American men. Men of the 9th and 10th Cavalry are commonly called the Buffalo Soldiers.

Emanuel Alonza Miller served during the Philippine Insurrection, in the Punitive Expeditionary Force against Mexican Insurgents, and in World War I. Miller was honorably discharged on July 21, 1925 with a rank of First Sergeant. His records note his character as excellent; his service as honest and faithful.  He died at age 74 and is buried in Mount Lebanon Cemetery.

Each January, Americans remember Martin Luther King with a day of community service. Community service, a mainstay of small town America, thrives in Franklin County. Benjamin Chambers, one of the county’s early settlers and founder of Chambersburg, started the county with a focus on community by giving land for churches, a courthouse, and schools. Generations of service in towns like Chambersburg, Greencastle, Mercersburg, and Waynesboro continues today and secures centuries of history and culture, appreciation of arts, and a chance to explore natural spaces.

The Franklin County Veterans Memorial Park and Military Trail of History, located next to the Letterkenny Chapel, is a decade-long project brought to reality through years of working together. The park honors all generations of the county’s veterans and spotlights a unique relationship between repatriated Italian soldiers, captured during World War II and housed at Letterkenny Army Depot. The cooperative work and support of Franklin County citizens created a veteran’s park and brought a not-often-heard story out of obscurity. Today, the chapel and adjoining veteran’s park offer four inter-faith, multi-cultural services each year. The Franklin County Military Trail of History begins at this point and launches exploration of sites such as a Viquesney World War I Doughboy, three cemeteries where USCT are interred, the birthplace of an American president, and a provincial British Fort where a colonial-Tory confrontation happened ten years prior to the outbreak of the Revolutionary War.

The Underground Railroad Coalition, formed in 2008 by Franklin County Visitor Bureau, showcases another type of community service in Franklin County. The Underground Railroad, the first mass movement of civil disobedience after the American Revolution and the foundation of American feminism, has a prevalent history in the county. Historian and author Charles Blockson called Franklin County a hazardous area of 100 miles that contained the most secretive, tangled lines of the Underground Railroad. John Brown made his northern headquarters Chambersburg, where he met with Frederick Douglass. Martin Delany spent ten years of his life growing up in Chambersburg after escaping Virginia, where it was illegal to educate free or enslaved blacks. With Franklin County ties to both abolitionist incidents and accounts of freedom seekers, the Underground Railroad Coalition identified three locations, which the National Park Service designated as Network to Freedom sites.  The coalition of more than 15 non-profit and historic organizations gave awareness to this important heritage.

Another contribution comes from Franklin County’s libraries and historic organizations. Annually these welcome hundreds of visitors, searching for family ties and a chance to visit ancestral graves and homesteads. The ongoing efforts of generations of volunteers at places like Franklin County Historical Society, Allison-Antrim Museum, Conococheague Institute, and the Waynesboro Historical Society preserve these records and share the information to connect many to their roots. It is an invaluable example of paying it forward.

Franklin County is well-known for festivals. Some celebrate community arts and history or even  the bounty of the harvest. Old Market Day in downtown Chambersburg and Townfest in Mercersburg are good examples of community members coming together to showcase history and agriculture. In Greencastle, Old Home Week is a triennial celebration that is a tradition since 1902. These citizens and organizations serve their communities, while building tradition and pride. The efforts to spotlight community brings different types of people together and builds sense of place.

In Waynesboro, Emma Nicodemus gave in a tangible and lasting way. She bequeathed 107 acres of her families home to the borough of Waynesboro for a park and museum. Renfrew Museum & Park provides greenspace to residents and tourists, who can experience firsthand the history and culture of the Germans that settled the land. In addition, the site is home to Renfrew Institute for Cultural and Environmental Studies, dedicated to helping people connect to their environment. The space called Renfrew and its supporting organizations pay tribute to forward-thinking dedication and the willingness to give to community.