Allison Antrim Museum Reprises “As They Saw The Rebels: Civilian Observations of the Antietam and Gettysburg Campaigns” by Ted Alexander 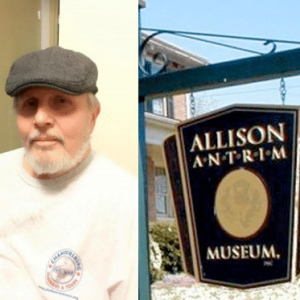 Allison Antrim Museum invites the public to step back to summer, July 2013, to hear and see Ted Alexander, presenting his original talk As They Saw The Rebels: Civilian Observations of the Antietam and Gettysburg Campaigns. Listen here on the museum website.

Ted was the creator of the monthly speaker series beginning in 1997 and arranged for 99% of the speakers and topics. He knew people nationwide and insisted that the monthly speakers could “not” all be Civil-War speakers. Ted spoke to the membership numerous times over the past two decades.

Every Old Home Week, Ted would have a special presentation for visitors and the audiences were full. He also performed duties as one of the interviewers for the Museum’s Reminiscing Series. One Old Home Week he led the panel discussion with Vietnam Veterans. Ted served two tours of duty in Vietnam.

Ted was both a local historian and Civil War historian and was the author of and or editor of 10 books on the Civil War. He authored the book “The 126th Pennsylvania” about Franklin County’s Civil War veterans and co-authored “When War Passed this Way,” with his uncle William P. Conrad. Ted was a descendant of two members of the 126th PA Regiment.

Bonnie Shockey, president and CEO of Allison Antrim, remembered Ted, “On a phone call a couple months ago, Ted was thinking about a new Corp Rihl, four-stop “tour” for Antrim Township. I’ve known Ted since seventh grade but over the last 22 years, through the Museum, our friendship crossed the spectrum from classmate, to professional, and that of very good friend. Ted is greatly missed, and no one will be able to fill his shoes, or rise to his level of “historian.”

With sincere thanks, Ted’s wife, Billy, and daughter, Rica, have graciously designated memorial contributions may be given to Allison-Antrim Museum, 365 South Ridge Ave., Greencastle, PA 17225.