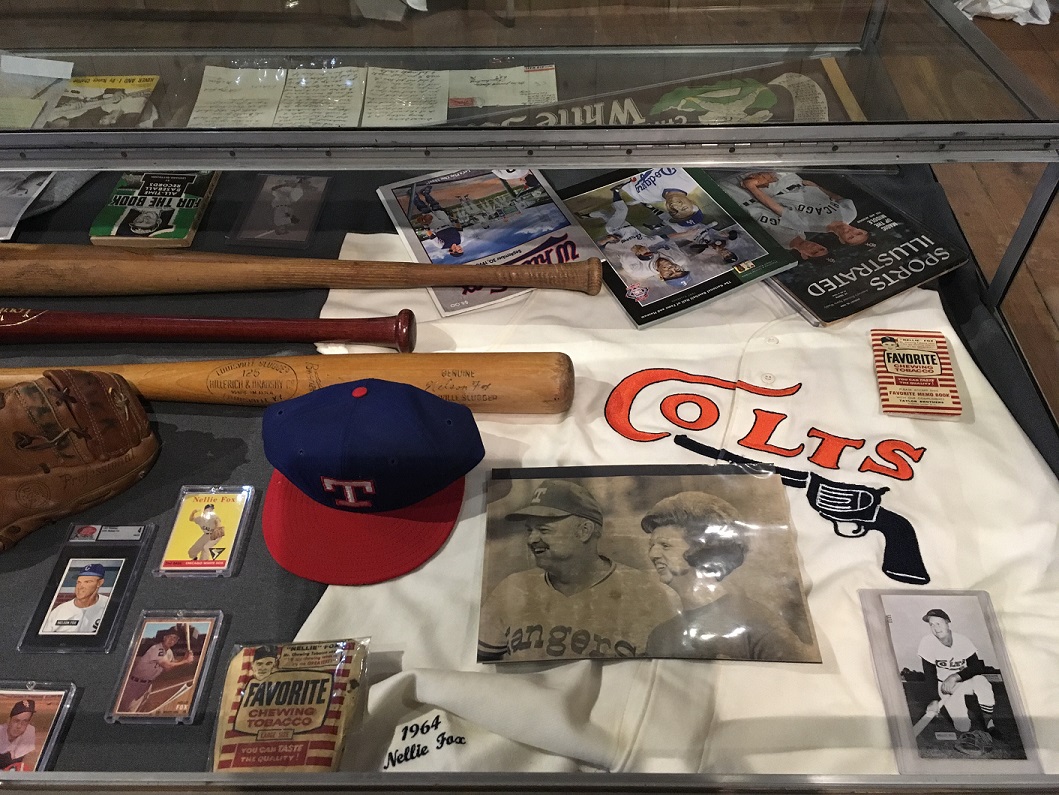 Play ball! Allison-Antrim Museum is reprising the Jacob Nelson “Nellie” Fox exhibition for the benefit of Greencastle-Antrim’ returning Old Home Week friends and family members. The exhibition highlights the career of Franklin County’s own Nellie Fox, Major League baseball player. Jacob Nelson “Nellie” Fox (December 25, 1927 – December 1, 1975) lived in and grew up in St. Thomas, Franklin County, PA. He played for the St. Thomas American Legion baseball team. Nellie did not finish high school because at the age of 16, Connie Mack signed him to play for the Philadelphia Athletics minor league team. Included in the exhibit is the letter that Connie Mack wrote to Nellie’s mother Mae Fox.

Nellie’s accomplishments and stats include the following. Three Gold Gloves as second baseman. He led the White Sox to the 1959 World Series and because of his performance that season, he was named the American League’s Most Valuable Player. Fox was the third-most difficult hitter to strike out in Major League Baseball history. In 19 seasons, he only had 216 strikeouts. To date (2019), Fox holds the Chicago White Sox record of playing the most consecutive games, i.e. 798, which at his retirement, is the sixth most in the history of the Major Leagues. Nellie’s spectacular career led him to be selected for 13 All-Star Teams.

In 1975, Nellie Fox was diagnosed with cancer and died December 1, 1975. Jacob Nelson “Nellie” Fox was inducted into the Hall of Fame in August 1997. Joanne Fox, Nellie’s wife, received the award and upon accepting it said, “He played with all his heart, all his passion, and with every ounce of his being — that was the best way he could show his appreciation to all those who helped him learn the game that became his life.”

This exhibition has been made possible through the generosity of a friend of the Museum, Justin Mayhue, Hagerstown, MD. The exhibit includes memorabilia from Chicago and Houston, game-used bats, a game-worn cap, many photographs including Nellie with Yogi Berre and Brooks Robinson, baseball cards, a 1961 Chicago White Sox team-signed ball, a letter from Nellie to Joanne while he was serving during the Korean War, and much more.

There’s no admission charge to the Museum but donations are accepted. The Museum is open regularly Tuesday to Friday, noon to 4 pm and Saturday, 11 am to 1 pm. For more information, please visit: www.greencastlemuseum.org, Facebook, on Twitter @greencastlemuzm, or call 717-597-9010.