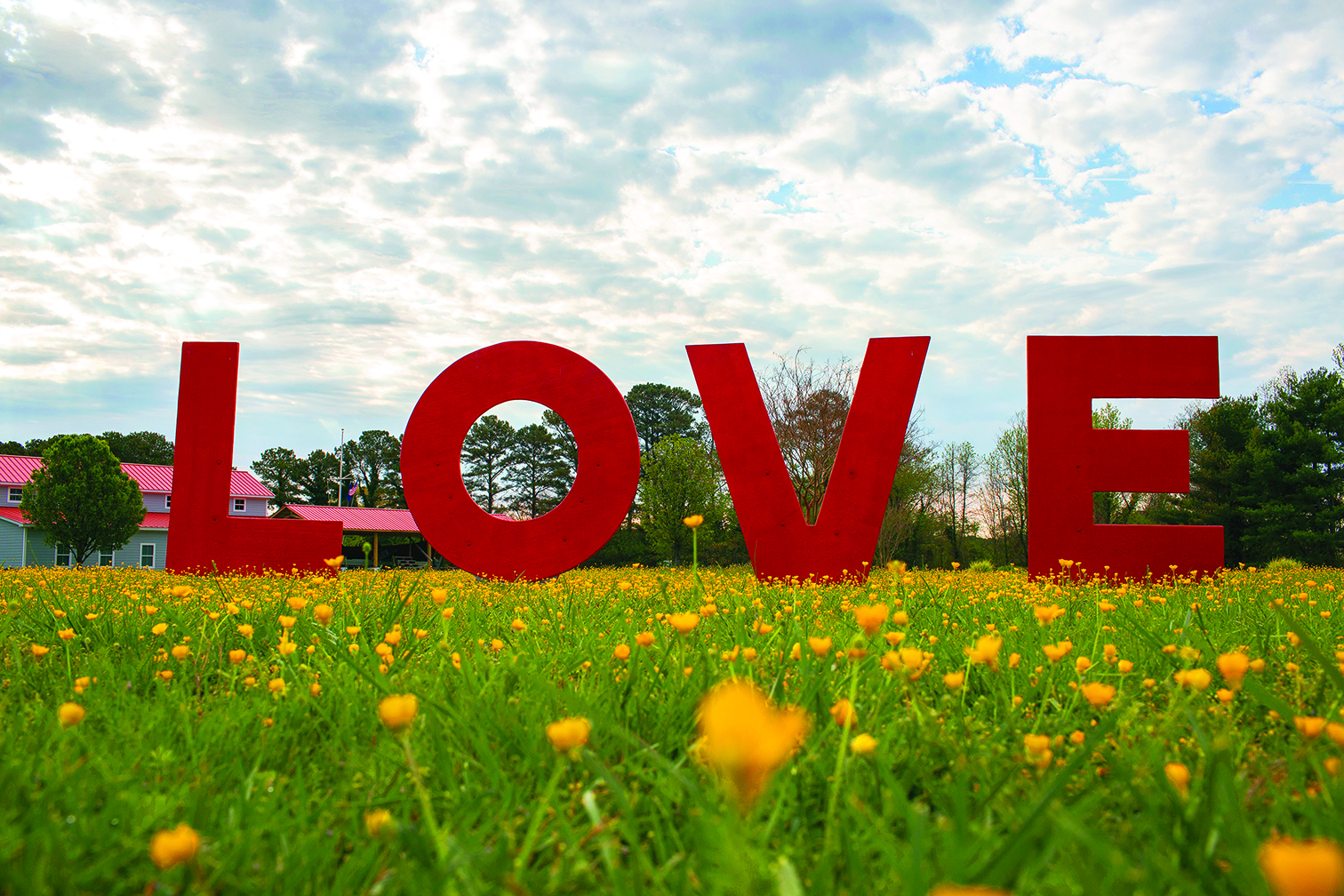 On The Other End of a Certified Tourism Ambassador Experience

Virginia’s slogan, “Virginia is for Lovers” turned 50 in 2019. To celebrate, letters spelling LOVE were setup throughout the state. Deltaville was chosen as one of the locations. The Deltaville Maritime Museum is in the background.

What does it feel like to be on the receiving end of a Certified Tourism Ambassador? My husband and I recently took a vacation that took us to some well-known tourist destinations and to places less known. We visited Myrtle Beach, Key West, Miami, and several places in the Caribbean.

But my best experience was in a small, out-of-the-way town in Virginia called Deltaville, located on a peninsula with the Rappahannock River to the north, the Piankatank River to the south, and the Chesapeake Bay to the east. The town developed around a large boat building industry, mostly for commercial bay watermen, but those days have passed.

Now the area is dotted with numerous marinas, boatyards, and marine-related businesses. Stingray Point, at the end of the peninsula, gets its name from the 17th century when Captain John Smith was stung by a stingray while fishing there. Seriously injured, Smith gave orders to his men to prepare a grave for his body. Legend has it that he was saved when Native Americans provided a cure, found at a nearby creek, now known as Antipoison Creek.

There isn’t much in Deltaville to brag about. No red lights. No fast food places. There is, however, a 7-11 convenience store, but there are no restroom facilities inside. It does offer a “job-johnnie” along the side of the building, if you are need. Our favorite place is the Maritime Museum and Grounds where we like to settle down at a picnic table, eat Maryland blue crabs and enjoy the beautiful view of the river. We have a small camper on a plot of land my husband owns outside Deltaville. It is raw camping. No electric. No heat. But the camper keeps us out of the weather.

Every year at the beginning of November, a near-by town, Urbanna, holds its annual Oyster Festival. It is a two day event and we enjoyed the first day of it together. The next day my husband wanted to go back to the festival, but I needed to find some place to park for the day and do some writing. I needed a table, a chair, electric, warmth and, hopefully, a place with wifi. We drove around Deltaville looking for a coffee shop or restaurant that would allow me to stay there for about five hours, but it was still too early. It seemed nothing opened until 10 am.

At one point we went to the Maritime Museum, but it was not open yet either. That’s when I spotted a woman walking on the grounds. I asked her if she knew anywhere in town that would meet my needs. She said, “I work here at the museum. You can use the board room, which is the library, and it will be quiet. There are snacks there that you can enjoy. And we also have wifi.”

I told her I felt like hugging her. After the museum open, I sat for hours and wrote our church’s Christmas production. I had to leave before it was done, but I finished it that night back in the camper, writing by the light of a small lantern, while shivering from the chilly night.

During the Tourism Summit in September, Mickey Schaefer talked about making positive experiences for the visitor. While this woman, who came to my assistance, probably was not a CTA, she should be, as she exemplified everything that the CTA program teaches.

While thousands were walking the streets of Urbanna at the Oyster Festival, I had the best experience as I enjoyed the hospitality of a place, which does not have many attractions to offer visitors. Deltaville was my favorite memory of our four week vacation along with that one person who portrayed the true CTA spirit. She showed me that it is not what your community has to offer that matters; it is what you offer those visiting your community.

END_OF_DOCUMENT_TOKEN_TO_BE_REPLACED

It started as an idea a little more than a year ago. Now, the first Waynesboro Brewmaster Beer Festival is only a few days away.

The event, being presented by Mainstreet Waynesboro, Inc., will be held from 12:00 to 4:00 on the afternoon of Saturday, May 16 in the Grove-Bowersox Parking Lot behind the Waynesboro Post Office.

Former Waynesboro resident, Andrew Maxwell, will return to town with four beers from his Rivertowne Brewing Company in suburban Pittsburgh. He, along with brew masters from Roy Pitz and Battlefield Brew Works, will each lead educational breakout sessions about the beer-making process and their respective entries into the industry.

Live music will be provided by Jon Ingels and Lucky Punk. Caveman BBQ, Dutch Country Soft Pretzels and Main Street Diner are set to serve as food vendors, selling a variety of items for attendees to enjoy.

Bob Steele from the Scorpion Radio Group will act as the emcee of the event, and people can capture memories of their experience using photographs provided by Click Pic Photo Booth.

Organizers have been impressed by the amount of support that this inaugural festival has generated from members of the community.

“Based on our ticket sales so far, I think it’s safe to say that this is an event that people are eager to be a part of,” said Scott Hershberger, Mainstreet Waynesboro’s director of economic development. “The planning process has also been made easier by managers at The Beer Shed and a generous number of monetary and in-kind donations.”

Tickets are $25 a piece, but anyone who wants to attend the festival and not consume alcohol can buy a “Designated Driver” ticket for $10. They can be ordered online by visiting www.facebook.com/WBBeerFestival or purchased at the office of Mainstreet Waynesboro, Inc. (13 West Main Street), The Beer Shed (226 Walnut Street) and the office of the Greater Waynesboro Chamber of Commerce (118 Walnut Street).

A limited number of tickets will be available to purchase (cash only) at the entrance on the day of the event. No one under the age of 21 years old will be permitted to attend. Everyone must display a valid form of identification, regardless of age. Smoking within the fenced in boundary of the festival is prohibited.

Named after the Totem Pole Playhouse, one of the longest running, nationally-recognized, fully professional summer theatres in the country, the awards focus solely on the performances of high school students, honoring their acting, singing, and dancing abilities.

The nominees for Outstanding Performance by an Actress and an Actor in a Leading Role are:

The nominees for Outstanding Performance by an Actress and an Actor in a Supporting Role are:

A total of 10 area high schools participated in this year’s Totem Pole Awards with the full list of nominees in each of the 15 categories available on Totem Pole Playhouse’s Facebook page and website.

Gettysburg College’s Majestic Theater, Sunday, May 17th at 5PM which will include performances from the nominated actors, actresses, and musicals along with the presentation of the 2015 Totem Pole Awards.

Tickets for the awards ceremony will be on sale through the Majestic Theater beginning Wednesday, May 6th at a cost of $12.00 for adults and $5.00 for students

WAYNESBORO—Area residents can turn cast-offs into cash during Renfrew Institute’s 10th annual Recycle/Reuse Earth Day Yard Sale, the perfect place to find a buyer for the things you no longer want.

The community yard sale is scheduled for Saturday, April 25 from 9 a.m.–3 p.m. during the institute’s Earth Celebration Day and Festival of Art event on the grounds of Renfrew Park in Waynesboro.

The event, which is a fundraiser for Renfrew Institute, is designed for sellers as well as bargain hunters. “The yard sale is a ‘win-win’ for those with items to sell and for buyers, and is perfectly aligned with Earth Celebration Day” said Tracy Holliday, event coordinator.  “Things you no longer need may be exactly what someone else is searching for.”

Individuals, families or groups can raise funds by renting a yard sale space to sell items. Spaces are $15 each, double spaces for $25 and triple spaces for $30. Each space accommodates an 8-foot table or two card tables. Sellers must bring their own tables.

Again this year, CFAR/Waynesboro Running organizers are collecting “gently used” running shoes to support the Waynesboro Area Middle School running club. Even worn-out athletic shoes are of value, as Barbara Layman and Steve Smith will collect them for recycling by Nike.

Early birds will find breakfast fare offered for purchase at the yard sale—fresh doughnuts donated by Krumpe’s Do-nuts, sticky buns donated by Hadley Farms Bakery, plus coffee, tea, cocoa and baked goods. A specialty hot dog will be offered, along with pita and hummus with veggies, “ploughman’s lunch” (rustic bread, cheese and an apple in bundled in a cloth napkin…no waste!), Frank’s Pizza, beverages and other tasty items, so shoppers and vendors can have breakfast or lunch in the park.

Renfrew Institute is not accepting yard sale items from the public. Pre-registration is preferred for vendors, but you may register upon arrival. No food or drink sales are permitted. Rain location is Waynesboro Area Middle School.

For more information and a registration form call the institute at 717-762-0373 or visit www.renfrewinstitute.org.