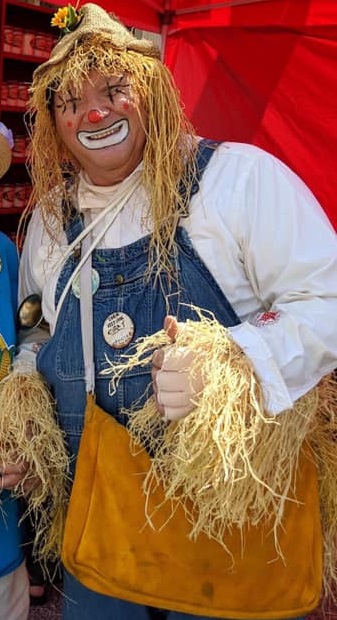 Several competitors turned out Aug. 31 in an attempt to win the coveted golden corn plaque, $50 and bragging rights. The Shippensburg Corn Festival held its annual Corn-Eating Contest in front of the Main Stage on Earl Street once again on the last Saturday in August. It was a day for reigning champs to defend their titles, returning contestants to try to beat their own records and first-timers who had no clue what they were getting into!

The MidLife Cowboys wrote a brand new song to sing for the 3 minutes of this year’s contest, as mouths and kernels flew to the beat. “I’m in my first contest at the Ship Fest, I’m hoping to win, and I will do my best. I got all my cobs lined up and I’m downing it with my Solo cup. If I’m lucky, I won’t throw up!” they sang.

Judges watched in awe as the contestants put away ear after ear of corn, laughing as the kernels flew and stuck to the corn-testants’ cheeks and lips. Some turned the ears as they quickly took in mouthfuls of the sweet yellow kernels. Others used the typewriter method to clear their cobs. Police Chief Meredith Dominick timed the contest, and alerted the band when the 3 minutes were up. At the end, Bryan Rottkamp had put away 16 ears of corn, earning him the title of champion. Rottkamp came in second place last year, beaten by Trevor Woolwine, who ate 12 ears to win the contest.

Woolwine was among the corn-testants again this year to defend his title. As was John Sumoski of Shippensburg, who won the plaque two years ago.

Sumoski came in second this year with 12 ears of corn. Woolwine had an “ear-off” with another contestant, Matt Engel, to determine the third place winner after they both ate 11 ears. Engel came out on top after eating an additional four ears of corn in 30 seconds.

Woolwine was supported by his fellow teammates from the Shippensburg University swim team. After the contest, he said he was shooting to eat three more ears than last year. “I was trying to get first again, but I ate too much this time,” he laughed. “I had a big egg sandwich for breakfast.” Woolwine said he wasn’t happy with the judges this year, and plans to return again next year.

After the contest, Rottkamp said he isn’t quite sure how he was able to eat 16 ears this year, up from last year’s dozen. “I don’t know,” he laughed. “I just kept on eating. You just don’t stop!” Rottkamp said he had no idea how many ears he had eaten until the contest was over. His advice for future contestants? “Don’t eat breakfast!” he quipped. Rottkamp said he will be back next year to defend his title. His winnings are going right back into his college education at Shippensburg University.

“I want to thank Shippensburg for this awesome event! It’s a good day,” Rottkamp said.

First-time corn-testant Edwin Cordero of Harrisburg struggled during parts of the contest, with a mouthful of corn. While he didn’t win, he did eat eight ears of corn, which is pretty good for a newbie. “I will definitely do it again,” he said, smiling. “Next time, I will better prepare myself!”

Special thanks to CTA Denise Bonura for the recap of Cornfest 2019.