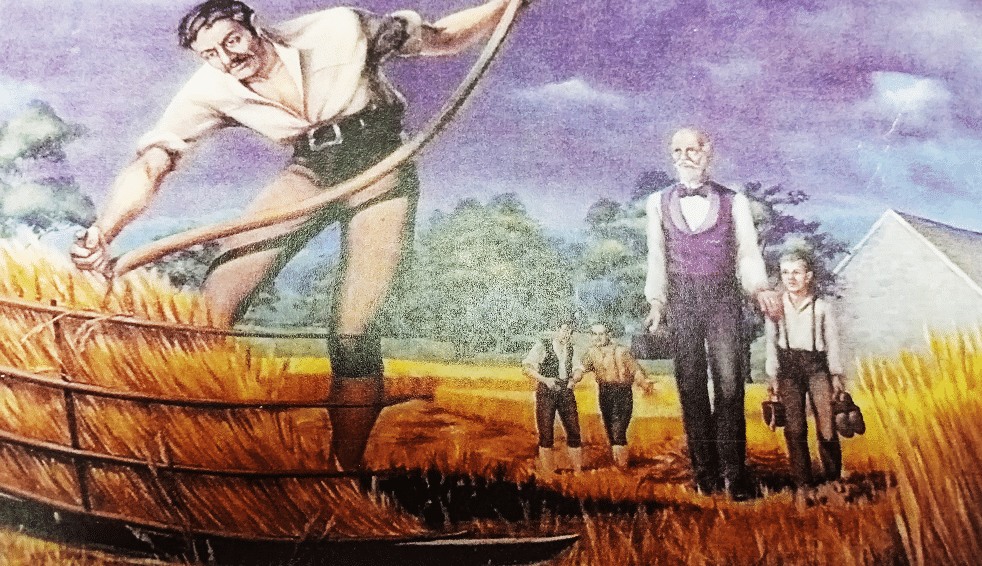 The following excerpt from “Old Mercersburg” about Michael Cromer glimpses a piece of the agricultural history and the character of the people, who farmed the land of Franklin County.

The Champion Cradling Feat of the World

It was reported in the harvest of 1857 that an expert cradler in the village of Mercersburg,
Pa., had cut in one day ten acres of wheat. The feat being noised about, some newspapers ridiculed
the idea as being absurdly preposterous.

“In the meantime the report reached the Millard Scythe Company, of Claysville, New York.
The proprietors wrote the cradler to ascertain whether, if they should make and present him a suit-
able cradle, he would undertake with it to beat his former record. Of course with his splendid rec-
ord to sustain, and his splendid pluck to carry him through, he accepted the challenge, but asked the
privilege of having the woodwork built to suit himself, which request the company acceded. In due
time the cradle came, a marvel of strength and beauty. The blade was five inches in width, by sixty-
five in lengfth, and made of silver steel.

“The memorable day of trial finally came. Judges were appointed, and the champion, in the
prime of life, just thirty years old, six feet three inches in height, and weighing 230 pounds, was au-
thorized to begin his task. From far and near the people assembled, some to gratify idle curiosity,
some to witness, as they predicted, a gigantic failure; and others to see this modern Hercules actually
accomplish his thirteenth labor, the wonder of the agricultural world.

“The cradler had employed his physician and friend. Dr. John S. King, to traverse the field with
him, and to give such medical assistance as circumstances seemed to require.

“By the physician’s advice he worked bare-headed, cutting the grain regularly by moving around
the field, thus losing no time. He was clad in linen shirt and pantaloons and ordinary slippers.

“He took no solid food during the day, but every two hours drank beef broth. Sometime within
the afternoon, a friend suggested that a piece of raw beef taken between the teeth would prove bene-
ficial. A messenger was accordingly dispatched to the village to procure a piece, which was held be-
tween the teeth and the juice absorbed. At the close of the day’s work only the fibers remained.

“Under the conditions agreed upon, the giant was to labor from sunrise to sunset. Once every
two hours, when taking his broth, he stopped to whet his scythe. Without halting, even at the noon
hour, he forged ahead, cutting a swath eleven feet wide and five feet deep, and making on an aver-
age twenty-two clips per minute.

“About two o’clock in the afternoon, a heavy thunderstorm came up, the rain falling in perfect
torrents ; the lightning flashed, the blade gleamed as it was thrust into the heavy grain swirled by
the angry storm ; slippers were thrown aside, and still this Ajax pushed ahead, determined to redeem
his pledge or die in his tracks.

“Despite all opposition, the cradler persevered. Finally, as the reappearing sun sank behind the
western hills, the judges called time. The field was subsequently surveyed, and measured twelve and
one-half acres.

“The product of this remarkable day’s cradling was 365 dozen sheaves of wheat, yielding, when
threshed, 262 bushels of grain. The labor of four men was required for two days to bind his
sheaves.

“The story of this champion day’s cradling— probably the greatest ever wrought by one man in
the world — was confirmed to me by eye-witnesses. When it is known that three or four acres of
good wheat, yielding 100 dozen of sheaves, is a good day’s labor, this record seems almost incredi-
ble; yet it is strictly true. The blade, which I myself examined and measured, was subsequently
secured by the State Agricultural Society and put into a new form, corresponding with the old one,
and the implement is preserved by the Society as a relic. Within the last few years this champion
passed from the scenes of earth to the land bevond the river. May he rest serenely with the reapers
there.”