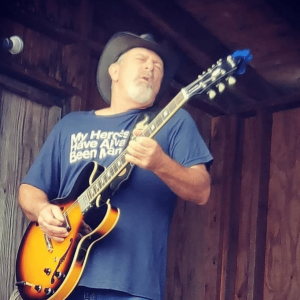 On this week’s Music Spotlight, the focus is thrown to a humble musician who enjoys sharing his passion and superb talent with those around him. Welcome Pnut to the Music Spotlight Family!

Arnold “Pnut” Small is a local musician residing in the historic area of Gettysburg in Adams County, PA. He is originally from New Hampshire and then moved to Florida at the age of 15 before making his way to PA. According to his wife, Babs Small, Pnut has been tickling guitar strings since he was about 6 or 7 years old. Since then, Pnut has utilized his time mostly for honing and sharpening his skills as a guitar player. The results certainly ring true when watching him in a live setting. His playing is articulate and well thought out. It is almost surgical to the point where he knows when a quick, wordy guitar run is necessary for the integrity of a tune. Then again he also knows when less is more, keeping his playing to simple melodies and guitar licks.

During his time living in Florida, Pnut grew an infatuation for southern rock, mostly at the hands of Lynyrd Skynyrd. That is not to say that influences stop there. His uncle Roy taught him the importance of practice and diligence. And Roy gave Pnut clear instruction on how to do it properly. At the age of 12, Roy recruited young Pnut for his band Franklin Falls Junction. Eventually, Pnut was introduced to the world of Bluegrass thanks to another mentor by the name of Leslie “Bozo’ Keyser. A big bluegrass guy, Bozo was integral in fostering Pnut’s love for music. In Keyser’s eyes, music was to be felt not just played.

Through Pnut’s career as a musician, he has collaborated and played in many bands. Two reputable bands worth mentioning would be Sabotage and Jakob Kane. He has also had the honor of sharing the stage with well known acts like Greg Allman, Marshall Tucker Band, Jimmy Hall, the Oak Ridge Boys and many, many more. Currently, he plays lead guitar and provides vocals for a band called “From the Grey” which is a 5 piece band out of Adams County. They are on Facebook and Instagram so be sure to search them through both platforms!

By nature and through his experiences as a musician, Pnut has become an incredibly humble musician and individual. It shows through his passion and attitude. Pnut says that without the people and fellow musicians around him, he is nothing. He certainly does not want to or intend to take any one for granted. To him, connections are priceless. Whether he is playing for one individual or one hundred individuals, he always makes an honest attempt to play like he is playing for a million people.

If you want to know more about Pnut, he is on Facebook both via his personal page as well as through connecting with his band From the Grey. Here is a short clip of him playing at a Welcome Center in Virginia! Check out his music here!