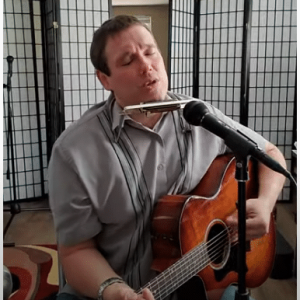 A resident of beautiful and historic Mercersburg, or as he calls it “The Wild West”, Robert Twine is one incredibly versatile musician. Robert pulls influence from country classic legends like Patsy Cline and Willie Nelson, and also the great Ray Orbison. Twine also collects influence from popular sensations over the years like Frank Sinatra, Jack Johnson, the Eagles, Nine Inch Nails, Tupac, Billy Joel, and so many more. As a result, listeners can hear a plethora of artists and tunes spanning the decades! It is hard not to sing along.

After hearing Pink Floyd’s “Wish You Were Here”, Robert knew he wanted to dig into the world of music. Initially, Twine started with learning his way around the keys on a piano. Eventually, he became intrigued by the rhythmic nature of playing the drums, however, these instruments were ultimately eclipsed by the guitar. After picking up his first guitar, Robert came to the realization of it being much more appealing and portable. Eventually, he began employing the use of harmonica to accompany his playing.

When it comes to music, Robert Twine loves the art of creating a song and making it his own. For him, there is just something about the process of creating a song, a pattern, a progression, and then fitting words to what is created. It is like a puzzle built by sound. Through finding this love of writing songs and also added a creative touch to his covers, Twine decided to give it a purpose. He has created a business based upon playing music for the elderly throughout the community. Robert travels to nursing homes and assisted living facilities to play for those in need of a little music. This is the case now more than ever. Through his eyes, he sees the struggles our elderly community members face. He believes a little entertainment can help.

If you want to know more about Robert Twine, you can find him via his personal Facebook profile. You can also listen to some of his original work on YouTube by searching “Robert Twine”.

For a little taste, here is his song, “Willing Yet”!  https://www.youtube.com/watch?v=jTHIvQMWIOs&feature=youtu.be&fbclid=IwAR3QSdbcy9WKtmjChoWzx86bPRUISWysiu2Ow3YJs9Um8nmjrMrH1PRED5w