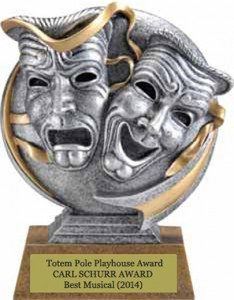 The awards ceremony will be held this year on the stage of the Totem Pole Playhouse in Fayetteville, PA. Totem Pole’s Producing Artistic Director, Rowan Joseph, will host the awards ceremony, Sunday, May 19th at 5PM which will include a the presentation of a production number from each of the participating high schools as well as performances from the nominated female and male soloists.

Ticket prices are $10 for adults and $5 for students 18 and younger. Seating is very limited and on a

first come, first serve basis. Tickets may be purchased on-line or by calling the Totem Pole Playhouse at (717) 352-2164.