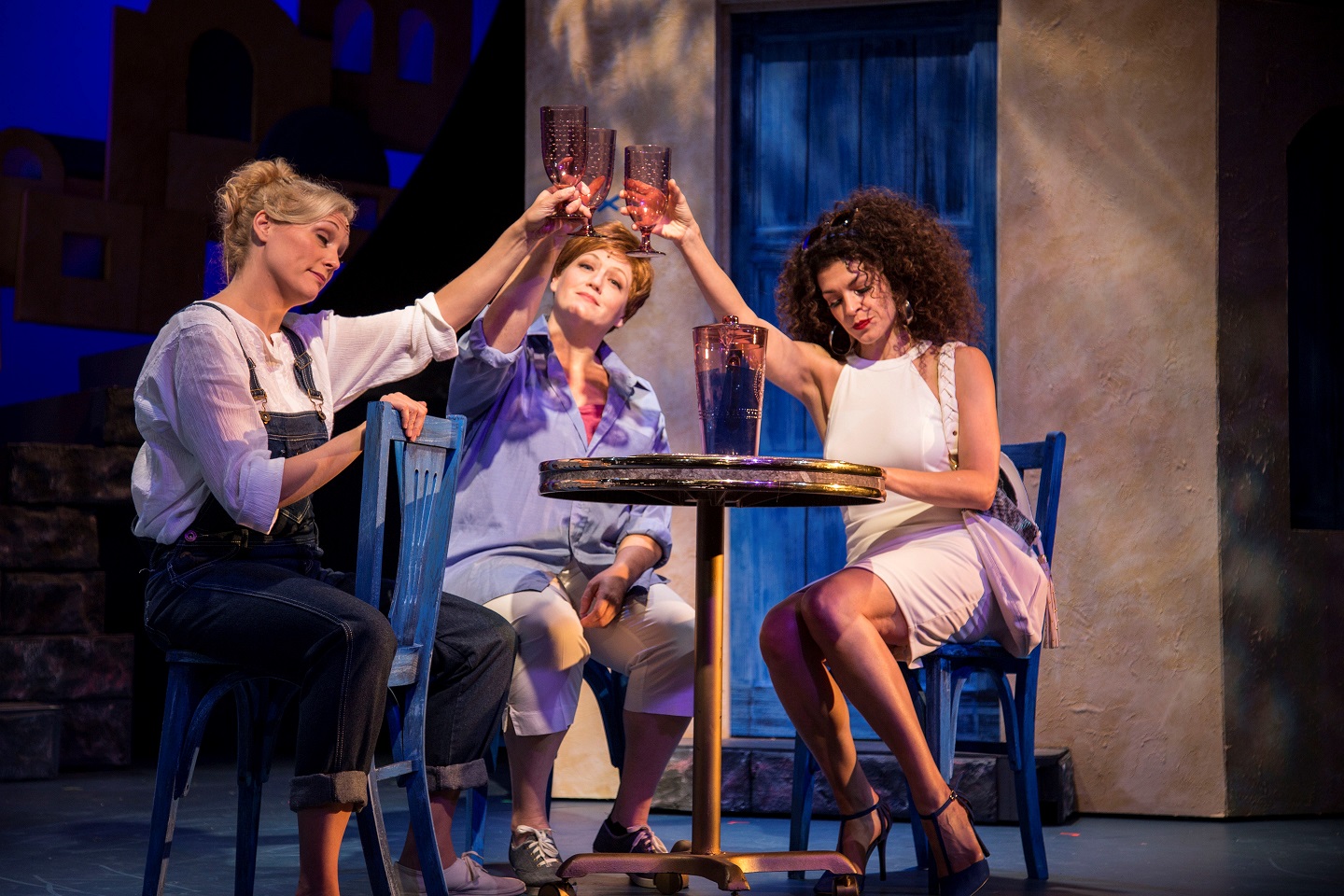 Totem Pole Playhouse, America’s beloved summer theatre, located in Caledonia State Park between Chambersburg and Gettysburg, PA, has announced that the Playhouse’s production of the mega-hit Broadway musical Mamma Mia! set a new box office record for advance ticket sales in the Playhouse’s 68-year history. To date, over $280,000.00 in tickets have been sold putting the show on track to surpass last season’s box office record-breaking production of Million Dollar Quartet. Due to the high demand for tickets, Totem Pole is reopening the 42-seat Club Section in the rear of the historic theatre which was removed several seasons ago. Mamma Mia! will begin performances this Friday at 8PM and Saturday at 2PM and 8PM with three low cost $20.00 general admission previews followed by the official Opening Sunday afternoon at 2PM. The production is scheduled to run through August 19th, a week longer than the previous three shows in the summer season.

Set on a colorful Greek island, the plot centers on a 20-year old bride-to-be, Sophie, who while reading her mother’s diary discovers the names of three of her mother’s former partners, Sam, Harry, and Bill. She decides to invite all three to the wedding without telling her mother, Donna. Sophie is convinced that she will recognize which one of the men is her father once she meets them. Donna, who was once the lead singer of a musical group, “Donna and the Dynamos,” invites her two former back-up singers, Rosie and Tanya. They all descend on the quaint rustic hotel Donna operates only to end up at a wedding that none of them could have expected.

Emily Ashton Meredith, who starred in Totem Pole’s 2015 production of Shenandoah, returns as Sophie. Playing her mother, Donna, will be Amy Decker who previously appeared at the Playhouse in several shows, most recently last season’s The Drowsy Chaperone. The three fathers will be played by Gil Brady as Sam, Ken Allen Neely as Harry, and Shawn Martin, who starred in last season’s Irving Berlin Revue, I Love a Piano, as Bill. Alexandra Melrose and Erica Hanrahan-Ball will appear as Donna’s former back-up singers, Rosie and Tanya. Playing Sophie’s fiancé, Sky, will be Max Falls with Breanna Ogaldez playing Lisa and Camila Paquet playing Ali, Sophie’s best friends. Taylor Kellas Warren, who played the Pharaoh in the season opener, Joseph and the Amazing Technicolor Dreamcoat, returns as Pepper, and Stavros Koumbaros, who starred in the 2016 production of Forever Plaid, will play Eddie. Rounding out the ensemble are: Leah Hassett, Mary Beth Donahoe, Morgan Southwell, Alison Rose Munn, Hank von Kolnitz, Elijah King, Nathan Richardson, and Cody Parson.

The production is staged and directed by veteran Totem Pole director, David Caldwell, and choreographed by Christine O’Grady, her fifth consecutive summer choreographing shows at the Playhouse. Darren Server, Totem Pole’s perennial musical director, serves in the same capacity for this final production in the Playhouse’s four-show summer season. Jim Fouchard, who has designed sets at the Playhouse since 1982, is the set designer, Stephanie Jones is designing costumes, Kate Wecker is the show’s sound designer, and Jonathan Dunkle is designing the lighting, with Ryan Gibbs serving as the show’s stage manager for the three-week run.

Mamma Mia! is based on the songs of ABBA, one of the most popular musical groups of all time, who topped the international pop charts during the 1970s and early 80s. The musical includes such well-known hits as “Super Trouper,” “Lay All Your Love on Me,” “Dancing Queen,” “Knowing Me, Knowing You,” “Take a Chance on Me,” “Money, Money, Money,” “The Winner Takes It All,” “Voulez-Vous,” “SOS,” and the title track. Over 60 million people have seen the show, which has grossed $2 billion worldwide since its 1999 debut in London. The film version of the musical starring Meryl Streep and Pierce Brosnan was released in 2008 and a prequel, Mamma Mia! Here We Go Again, opened in movie theatres nationwide last weekend.

Club section tickets are only available by calling the Totem Pole Playhouse Box Office Monday through Friday, 10 a.m. to 4 p.m. at (717) 352-2164; all other seats may be purchased on line at www.totempoleplayhouse.org.