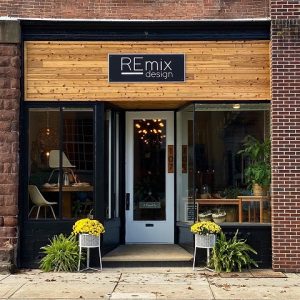 Driven by a need to create and a flair for design, Kendra Matusiak found a space on Main Street where she can mix her varied talents and share them with the public.

Matusiak opened REmix Design in July at 107 N. Main St. in Chambersburg, bringing to fruition an idea birthed during a power outage in September 2011. A few months before her concept came to light, she graduated from Penn State with a bachelor’s degree in architecture and moved back in with her parents, Chris and Ed Matusiak. She started repainting furniture she found at yard sales and doing some reupholstering.

While struggling to find a full-time job, she brainstormed while the electricity in her home was out about how she could make a living out of transforming personal and business spaces into welcoming environments. And then she needed a name.

“I’ve always been kind of geared toward sustainability,” Matusiak said, so having “re” (as in reuse, recycle) in her business moniker made sense. The “mix” refers to the myriad styles she loves, including industrial, rustic and mid-century.

The 31-year-old owner combined college lessons she learned about functionality and putting thoughts on paper with her interest in interiors and lighting to help her shape her business. She also incorporated the sewing talents of her mother, whose macrame creations, pillows and upholstery are sold there. The handy skills her father helped her hone have been useful, too, particularly with power tools.

Matusiak got her feet wet as a vendor at Vintage Market at the Old Red Barn on Warm Spring Road in Chambersburg. More than a year ago, she started selling plants there that she purchased from a wholesaler, rounding out her interior wares.

“I didn’t want to be just about furniture,” she said. Flora is an important, inviting element in decor, she added, and now the “plant bar” at REmix is home to some of her top-selling items.

Her diverse merchandise ranges from 25-cent stones and crystals, to plants for $3 and higher, to dresser and nightstand sets for $995. She does some online sales through Etsy and Facebook Marketplace, and has shipped items to buyers from Washington, D.C., New York, Colorado and Los Angeles. But the Chambersburg-area customers are the heart of her business.

“You can’t beat locally. People know you’re there,” she said.

The 1,000-square-foot space features two sizable tables in the center that hold merchandise when the store is open to the public and are used for classes at other times. Matusiak said she has room for 10 to 15 people to take do-it-yourself sessions, which have included lessons on plants, making autumn wreaths and macrame.

Another component of REmix is helping owners of homes and businesses bring their design ideas to fruition. Matusiak sees parallels in designing for both environments.

“A business should, in a sense, feel a little bit homey and welcoming,” she said.

Running a business with so many elements occupies only half of Matusiak’s nearly 80-hour workweeks. Since 2012, she has worked for AWI Fixtures and Interiors Inc. in Shippensburg, Pa., doing retail interior design for businesses like college bookstores and museums. She goes to REmix for an hour before work every weekday, then spends three to four more hours there every weekday evening. About eight hours on each weekend day are devoted to building up her inventory, keeping up with the bookkeeping and preparing the store for its public hours.

The store is open for shoppers on the first and third Thursdays, Fridays and Saturdays from 10 a.m. to 7 p.m. and noon to 5 p.m. on the first and third Sundays. On the same days the second and fourth weeks, she works on projects or holds classes. Her mother works at REmix during the hours that Matusiak is fulfilling her duties with AWI Fixtures and Interiors.

In the midst of her first holiday season as a business owner, Matusiak has had to learn a lot about keeping her inventory stocked and organizing all the facets of REmix.

“I’ve had to bring stuff from my house in” when her shelves seemed a bit sparse, she said with a laugh. “It’s best to keep organized as you go. I’ve been forced to look ahead.”

Matusiak faces the future with enthusiasm. “I’ve always been the kind of person who wants to see where else I could go,” she said