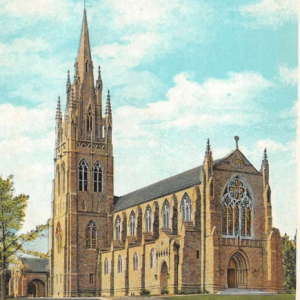 One of 163 traditional carillons in the United States, The Swoope Carillon in Barker Tower contains 50 bells. The original 43 bronze bells were cast in 1926, a gift of Henry B. Swoope (1900).  The bells contain bits of historic metal collected worldwide by alumni and friends of the school, including copper coins, metal from the ship “Old Ironsides,” pieces of artillery shells gathered from the fields of France in World War I, a shaving from the Liberty Bell, and bits from Admiral Nelson’s flagship at Trafalgar, “HMS Victory. “The addition of 6 new upper bells added in 1996, brought the total to 49 bells ranging in size from 10 pounds to more than three-and-a-half tons, which ranks it 43rd in weight of the largest (lowest pitched) bell. The carillon’s tower was named in honor of Bryan Baker, who played it for more than five decades, in 1978. In 2003, the 50th bell was added and dedicated to James W. Smith.