Midnight Battle Along The Mason Dixon

In rain and darkness opposing forces engaged in some of the most confusing and chaotic fighting of the Civil War.  Read more.

General Samuel Wiley Crawford, a native of Franklin County, commanded a battery at the bombardment of Fort Sumter and was the surgeon on duty. Crawford was born near Fayetteville, about six miles east of Chambersburg, off Route 30, and was Franklin County’s highest ranking officer in the Civil War. Wounded at the Battle of Antietam in September 1862, he recuperated in time to play a role in the Battle of Gettysburg where his command the Pennsylvania Reserve Division and assisted in driving Confederates from Little Round Top on July 2, 1863.

A few days after the surrender of Fort Sumter to Confederate troops, president Abraham Lincoln met with Pennsylvania Senator Simon Cameron, General Winfield Scott, and Colonel Alexander K. McClure, a Chambersburg lawyer and newspaper editor, who was a key leader in the Pennsylvania Republican party. Lincoln requested their aid in securing 75,000 troops to defend the Union. By the end of April, Chambersburg was readying for a Maryland attack. Maryland, a border state, was a slave state yet did not secede from the Union. Fortunately, the attack did not materialize, but troops amassed in the Franklin County seat. By May 1, about 3,000 Union soldiers were camped in and around Chambersburg. By June 1, the number increased to 8,000. Within another week, the army encampment at Chambersburg swelled to 20,000. Chambersburg became a military staging ground. 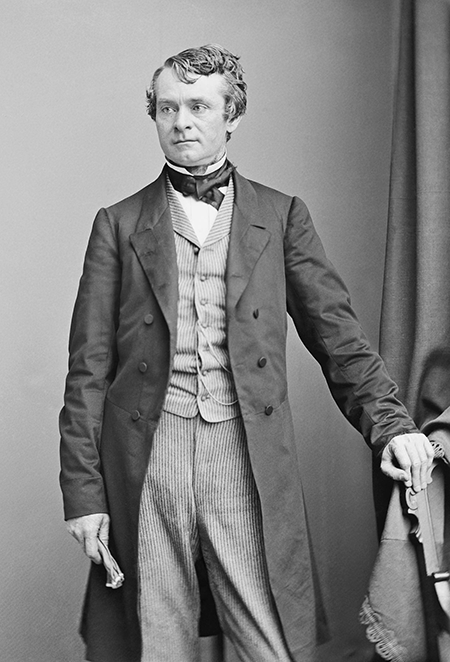 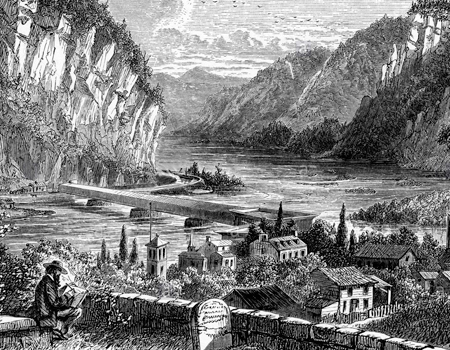 Thirty-seven miles south of Chambersburg, Union and Confederate forces clashed at the Battle of Antietam, near Sharpsburg, the first battle on Union territory. About 400 of the wounded were transported by Cumberland Valley Railroad cars to Chambersburg for care in makeshift hospitals.

Confederate Commander Robert E. Lee ordered General J.E.B. Stuart to destroy the railroad bridge in Scotland, near Chambersburg. Because it was iron, it was damaged but not destroyed. Stuart and his troops seized horses, food, ammunition, and hostages in Mercersburg and continued onto Chambersburg taking more horses, cutting the telegraph wires, and burning the railroad shops. Troops camped in Fayetteville, moved through Cashtown, into Emmittsburg, and onto Virginia, successfully evading Union troops.

Confederate troops, led by General Albert Jenkins, entered Chambersburg about 11 PM. Jenkins commanded the advance unit of Lee’s 65,000 men. Jenkins’ men went throughout the county, seeking supplies and looking for escaped slaves. Believing that a sizeable number of Union troops were heading to Chambersburg, Jenkins retreated to Greencastle. A false alarm, it was county residents heading to Chambersburg to see Johnny Reb.

About 8,000 Confederate troops crossed the Mason-Dixon Line and camped at Greencastle. A small detachment of Union troops rode onto the farm of Archibald Fleming, just north of Greencastle. Two men, Sergeant Milton Cafferty and Corporal William Rihl rode into the front yard of the farmhouse. Concealed Confederate troops fired on the men, killing Rihl. Today, a monument stands at the site, noting Rihl as the first Union soldier killed on Pennsylvania soil and north of the Mason Dixon Line during the Civil War.

As Confederate troops converged on Franklin County, horse and cattle raids were ordered in Mercersburg and nearby McConnellsburg. Troops, under the command of Jubal Early, marched into Waynesboro, through Quincy and Mont Alto, and to the Caledonia area where they spent the night. On the morning of June 24, Rebel infantrymen, led by Robert Rodes marched down the main street of Chambersburg with their band playing The Bonnie Blue Flag. General Richard Ewell arrived by carriage, established headquarters in Franklin Hall, and displayed the Confederate flag from the cupola of the Franklin County courthouse.

On June 25, Ewell met Jubal Early and instructed him to move toward York and burn the railroad bridge at Wrightsville, PA. Before leaving Franklin County on June 26, Jubal Early stopped at the Caledonia Ironworks for some “unordered activity.” Owned by outspoken Confederate-opponent, Thaddeus Stevens, the ironworks and its complex of buildings were set ablaze by Early and his troops as they headed out of the county.

The same day, General A.P. Hill rode into the center of Chambersburg where he was soon joined by Confederate Commander Robert E. Lee. The two men engaged in a brief, hushed conversation and departed for their respective camps—Hill in Fayetteville and Lee in Messersmith’s Woods. Until Lee’s departure on June 30, he camped east of central Chambersburg in this site of community picnics and festivities. Over the next few days, thousands of Confederate troops poured into Chambersburg. In all, about 60,000 troops camped around Chambersburg.

Lee’s initial orders directed troops toward the state capital, but reconnaissance received on June 28 changed Lee’s plans. To protect his communication and supply lines to Virginia, Lee realized he must move east to intercept Union troops and recalled troops heading toward Harrisburg.

On July 4, 1863, a seventeen mile train of wounded and dying men began the retreat from Gettysburg through Franklin County. During the retreat on the night of July 4-5, 1863, Civil War came to South Mountain in what is known as the Battle of Monterey Pass. The Battle of Monterey Pass was the second largest battle in Pennsylvania, fought in two states, Pennsylvania and Maryland, and four counties (Adams and Franklin Counties PA and Frederick and Washington Counties in MD).The conflict involved 10,000 Confederate and Union soldiers. The Battle of Monterey Pass is one of the most confusing battles of the Civil War.For several hours, during the blinding thunderstorm in the middle of the night, the battle was carried out in between lightning strikes and muzzle flashes. Six hours of heavy fighting had spilled over to Fairfield Gap as well as Leitersburg while General Kilpatrick gained the South Mountain summit of Monterey Pass. At Fairfield Gap, a portion of the 1st Michigan Cavalry was beaten back by Confederate cavalry while at the Monterey House, two guns of Pennington’s battery began shelling the Confederate wagons. By 3:30 a.m. on July 5th, Kilpatrick successfully reached the turnpike where Ewell’s wagon train was located, capturing and destroying 9 miles worth of wagons, taking 1,360 prisoners and a large number of horses and mules as they moved on toward Ringgold, Maryland.

The Great Fire of 1864 – The Burning of Chambersburg

As the likelihood of a Confederate victory waned, the harsh impacts of war in the south destroyed mills, crops, barns, and warehouses. On July 28, 1864, General Jubal Early issued the order to General John McCausland to ransom Chambersburg for $100,000 in gold or $500,000 in Yankee currency as retaliation for Northern devastation of the Shenandoah Valley. As Confederate troops closed in on the Mason Dixon Line and its northern target of Chambersburg, General Darius Couch, who commanded the Headquarters of the Department of the Susquehanna at Chambersburg, worked to evacuate military supplies from the town. A small unit of Union soldiers secreted themselves in the hills along St. Thomas, surprising the McCausland column of Confederates and holding them back a few more hours to allow Couch to liquidate the army headquarters.

By daybreak, Confederate soldiers had positioned cannons atop the hill west of Chambersburg. About 5:30 AM, they fired on the sleeping town, rode into town, and rang the courthouse bell to gather residents to hear the ransom demand. According to an account by Chambersburg shopkeeper Jacob Hoke, <

“The money demanded was not, and could not be paid, for the reason that there was nothing like the amount demanded remaining in the town. Besides the citizens did not feel like contributing aid in the overthrow of their government.”

Once it was clear to Confederate troops that the ransom would not be paid, they wasted no time in setting the fires. By day’s end, over 550 structures had burned, 2000 people were homeless, and more than $750,000 in property was lost.

Hoke described the column of smoke created by the town’s burning as a crown of sackcloth, asserting, “It was heaven’s shield mercifully drawn over the scene to shelter from the blazing sun the homeless and unsheltered ones that had fled to the fields and cemeteries around the town, where they in silence and sadness sat and looked upon the destruction of their homes and the accumulation of a lifetime.”