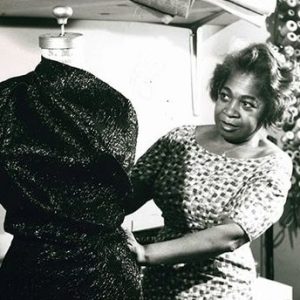 Zelda Barbour Wynn Valdes was born June on 28th, 1905 in Chambersburg, PA. She was the granddaughter of a seamstress and in her late teenage years she began working in a high-end boutique in the 1920’s.

With a true love and passion for fashion and design, Zelda opened the first African American boutique in 1948 along with her sister. The boutique was originally opened in Manhattan, NY on Broadway and would later move her studio named, Chez Zelda to Midtown, NY.

In 1949 Zelda Barbour Wynn Valdes was elected President of the New York Chapter of the National Association of Fashion and Accessory (NAFAD.)

Through her career as a designer and dressmaker, Zelda attracted many celebrity clients including Mae West, Dorothy Dandridge, Gladys Knight and Ella Fitzgerald among more. She also designed the gowns for Maria Ellington’s (Mrs. Nat King Cole) wedding party.

Continuing to make a name for herself and a mark on the fashion industry for African American women, Zelda Barbour Wynn Valdes captured the attention of Hugh Hefner. In 1958 Hugh hired Zelda to design the first Playboy Bunny costume which debuted in Chicago in February 1960 during the opening of the first Playboy Club.

She went on to do extraordinary work for many high-end clientele as well as go on to be a contributor to the education of youth interested in fashion. Zelda directed workshops for the Harlem Youth Opportunities Unlimited and Associated Teams (HARYOU-ACT) in 1960.

In 1970 Zelda was asked to design costumes for the Dance Theatre of Harlem and by 1992 had designed costumes for over 80 production.

Zelda Barbour Wynn Valdes died on September 26th, 2001 leaving behind a legacy in the fashion world!