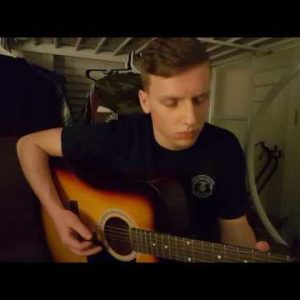 On this week’s edition of Music Spotligth meet a young musician and resident of Franklin County…Nik Wiesniewski.

Nik Wiesniewski is a Waynesboro native making up part of the younger demographic of musicians in Franklin County. His voice is powerful, yet ever so gentle to the ears. His playing is heartfelt and intentional with each note. When you hear him, you could certainly pick him out of a crowded open mic scene! Often times he is given the opinion that his voice resembles the likes of Ed Sheeran. But there is so much setting him apart from the famed musician and songwriter. As far as influences, they are derived from the many local musicians within Franklin County. At a young age, Nik remembers going to venues to listen to many different talents such as Henri Verdel.

Nik’s originals portray the rare aspects of love and appreciation of human life. With each tune, he exposes human vulnerability and all that it entails. Each word shedding the shear honesty that he is not afraid to show. While listening, it’s hard not to get lost in a trance. This young man stands by the statement of “appreciating human life” and just how beautiful it is. This is a statement all of us could learn to embrace and cherish.