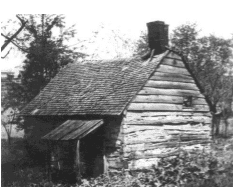 As each local building was shown, he talked about the local building features that have antecedents in Europe and where those features are most prevalent. ~ To watch the video, please visit this link: https://greencastlemuseum.org/videos

Reed studied log houses and other types of log buildings since 1972. He has traveled most of the US and Canada, as well as almost every country in Europe, in his pursuit to understand the traditional log building technologies and where they were developed.  Reed apprenticed to Paul Lewis of the Catoctin Mountains for several years to learn the authentic methods of constructing a log cabin. Later he studied at George Washington University where he received his Masters and PhD. Reed has come to understand that most of what we have been taught over the last century concerning the quintessential American log cabin is mostly inaccurate and, therefore, poorly understood.

Join Allison-Antrim Museum for this enlightening talk about the world’s longest-used housing form and certainly one of the most romantically honored and yet humble structures the world has ever known. The late Ted Alexander introduced Doug.