Laugh With The Capitol Theatre 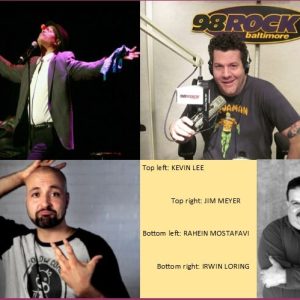 Need a good laugh? The Capitol Theatre has you covered with A Viirtual Night of Comedy, starring comedian/magician Kevin Lee with appearances by comedians Jim Meyer and Rahmein Mostafavi. Show is 9 PM on Friday, June 26, and is hosted by Irwin Loring. Tickets are $15 per household. Show is recommended for mature audiences and not recommended for minors.

Click here link to purchase your household tickets!  A Zoom link will be sent to you 30 minutes prior to the start time.

If ever there was a comedian/ magician to be seen, it is Kevin Lee. Kevin’s unique combination of comedy, magic and juggling leaves audiences both in awe and in stitches. Lee, has appeared on scores of national television stations on shows such as “Showtime at the Apollo”, HBO’s “Def Comedy Jam”, and Jamie Foxx’s “Uptown Comedy Club”, to name a few. Lee was also voted “Washington DC’s Funniest Comedian” by Washingtonian Magazine. Kevin headlined here at the Capitol Theatre last season and absolutely convulsed the patrons with loud, sustained laughter!

Originally from Portland, OR, now living in Maryland, Jim Meyer walks this world as a Comedy Highlander, and has been called the greatest force of laughter the Earth will ever know. He has been called a ray of light in a world overcome with darkness. He’s also been called Mike by the Chinese woman at the sub shop who never remembers his name.

Rahmein Mostafavi charms crowds with comic timing and charisma developed throughout two decades of live performance. He addresses social and political topics with a combination of satirical and observational comedy, leaving audiences with a greater sense of purpose, sex appeal and the occasional leg cramp. Rahmein entered the stand-up world after working as a longtime cast member of “Shear Madness,” the acclaimed Kennedy Center improv/comedy whodunit. His natural joke writing ability, combined with his acting chops, has won him rave reviews in both the Washington area and around the country.