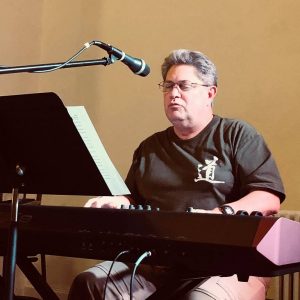 Who loves music? We know you do! And luckily for you, it’s ANOTHER week for Music Spotlight! On this week’s edition of Music Spotlight, we introduce to you, Mr. Brian Shermeyer.

Brian comes from Waynesboro, PA, one of the fine towns that make up Franklin County. Brian is a seasoned musician with an MBA in music! However, a majority of his training and skills were sharpened via touring in the 70s and 80s. He’s collaborated with numerous musicians playing a variety of musical styles such as jazz, funk, rock, and country. More recently though, Brian has returned to writing, composing and performing music. And currently he collaborates with another local musician named Brad Munn. Together they make up the duo “The Tone Riders”.

Brian is also an active member of the Waynesboro Arts Alliance. He makes up one of the members of the Singer-songwriters group that meets in Music Makers of Waynesboro and he also attends their open mics. In being a member of these groups, it has instilled an inspiration for Brian to continue honing his craft as a songwriter. As a result, he created a YouTube page in February of this year.

Brian’s YouTube channel is a platform for which he shares his originals. His pieces feature improvisations common within jazz music. It makes for an unpredictable journey through his songs. The lyrics pose complex sentences and thoughts that leave listeners thinking and wanting to breakdown concepts behind the song. Listeners will tap into their introspections, their heart and soul as well as their spirituality.

For a taste here is Brian’s song “You Never Know,” listen here.