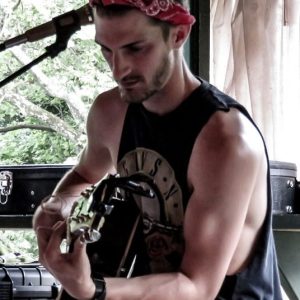 Who is hungry for some more music? Well lucky for you, it is a new week and also a new Music Spotlight post! This week’s music spotlight features a Franklin County local musician veteran. The Spotlight introduces to you, Mr. Devin Fields.

Devin Fields has been in the local music scene since he was about 14 years old. Though he primarily plays guitar, Devin has developed the ability to be a versatile multi-instrumentalist. Throughout his years, Devin has been a member of various acts such as Parks and Fields and also shares the stage with Evan Crider. His most notable experience comes from the band Dime Store Profits.

Watching Devin Fields play is an experience in itself. Between his singing and playing, he plays with such enthusiasm and emotion. Not to mention, he has an innate way of capturing his audience’s attention. From banter with fellow musicians, to telling stories for his audience, Fields is a natural performer. The repertoire coming from this musician is enough to captivate an audience as well! Devin dishes out all the classic rock hits you can think of. From Pink Floyd, to Prince, Devin Fields can improvise with any song request his listeners throw at him.

Interested in knowing more about Devin Fields? Be sure to find him on Facebook! Though he does not have a music site or YouTube channel, he plans to begin uploading cover videos and originals in the future. Devin will also be performing This Saturday, June 5th, with Evan Crider at Warehouse Tap Room in Hagerstown, MD. Follow Evan Crider on Facebook.com/EvCriderMusic for more details!

Check out Devin doing a mash-up of cover songs here