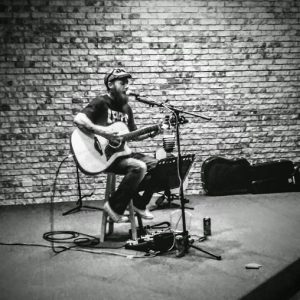 Hungry for some more local music? Well, you are in luck because it is another Music Spotlight! This week’s edition of Music Spotlight focuses on a full-time, hardworking musician with a creative mind that does not stop. His name is Jason Sheffield.

Originally from McConnellsburg, PA, Jason is now residing in the historic town of Gettysburg. He is a seasoned musician who has been doing his thing for many years. His music and career have taken him to many towns and cities all over. From doing tours down the east coast, to busking on the board walk of Ocean City, Maryland, Jason Sheffield is a musician who doesn’t rest.

When it comes to music, Jason covers a variety of cover songs paired with his catchy originals. The covers played by Jason do not always resemble the original tune. More so, Jason attempts to put is own personal touch on the particular song that is played. It is intriguing to see and hear because it exhibits his innate ability for creativity. This same aspect holds true for his originals. When hearing a Jason Sheffield original, you cannot help, but to be hooked and pulled in by is groovy guitar rhythms. Then in comes his voice with catchy words and phrasing. It also falls into the same entrancing rhythm evoked by his guitar playing style.

Wanting to know more about Jason Sheffield? If yes, that is perfect because you can find him on Facebook via his personal page. He is also active on Instagram at “iamjasonsheffield”.

But for a little taste of Jason’s work, here he is performing his original “Inside My Head”  on YouTube: