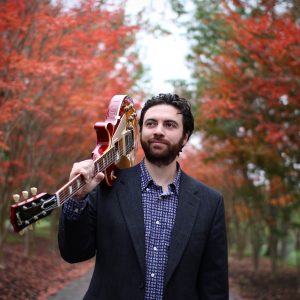 On this week’s Music Spotlight, we feature a musician who is a local Franklin County resident. Introducing, Mike Quinlivan.

At an early age, Mike fell in love with music. As a young boy, he loved singing, and soon became intrigued by the expressive sound of stringed instruments. Starting on violin and viola, what ultimately grabbed his attention was the guitar. The variety of guitar music surrounded him, and it became the instrument he set out to master.

Growing up, Mike surrounded himself with many varieties of musical genres with blues and jazz piquing his interest the most. The musical works of jazz composers like Miles Davis, Thelonius Monk, and Jim Hall opened his mind to the world of possibilities in music. Soon to follow were world-renowned jazz and blues guitar players, Robben Ford, Mike Stern, and John Scofield. Then there was the innovative playing of early jazz guitarist Wes Montgomery and the raw and highly emotional playing of the great Rory Gallagher that really fed the fuel to Mike’s fire. All of these musicians set the stage on which Quinlivan wanted to walk.

There was something about jazz that seemed so freeing and expressive. It gave Mike the creative reigns that he so desperately desired. Jazz music emphasizes improvisation, and that aspect of jazz music really appealed to Quinlivan. It is certainly apparent when he is performing live.

When performing live, the music becomes a state of meditation for this musician. This is mainly as a direct result of Mike’s improvised nature of playing. When playing, he has one goal he always aims to achieve. In his words, “I try to achieve a level of musicianship where I am no longer playing music and instead, having a conversation.” In Mike’s experience, this is when he witnesses audience members dance, smile, or pensively contemplate human existence. “That’s when the music is happening”, Quinlivan says, “otherwise, it is almost like some one just listening to a radio or a record.” There is no change, no variation. Improvisation is like adding spice to a meal, making it tasty and something to remember.

Mike will soon be releasing his debut EP titled Blue Gadjo on every major streaming platform and frequently posts videos on Instagram so be sure to follow him at @mikequinlivanmusic. Mike Quinlivan is also an active music educator, teaching privately and at Cumberland Valley School of Music.