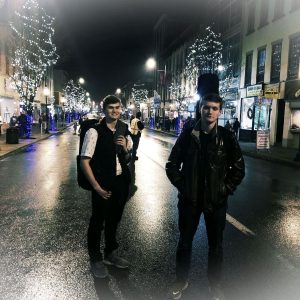 There is a new group building a reputation in the area! This particular group was also one of 2020 A’Cappella Unplugged’s contestant groups.

Pyxus is brother-duo out of Mechanicsburg, PA. When it comes to singing, both brothers Jake and Robert Myers share the role of vocals. The difference between the two is their instrumental roles in the duo. Robert Myers utilizes the high-pitched, twangy, and folky sound of the Mandolin whereas his brother Jake plays a flat top acoustic guitar. Together, the brothers of Pyxus have begun developing their sound and style.

According to Robert, he says they are trying to carve out their spot in the world of Newgrass. Newgrass is a genre of bluegrass that acquires influence from crossing genres like rock and roll and blues music with a touch of jam-band for added flavor. Pyxus’ sound is also heavily defined by the progressive folk movement. Covers will sound familiar to the listener but tends to be slightly altered with style by the band. As they progress in defining their sound and branching out from their comfort zones, the two brothers also hope it will evolve ultimately evolve folk music and bluegrass collectively.

For the brothers of Pyxus, a variety of bands and musicians from the bluegrass and folk world play into the sculpting of their sound. Two soloist composers worth mentioning would be Chris Thile and Molly Tuttle. Chris Thile also played in a group named Punch Brothers who are a notable influence. Other notable groups would be the Kruger Brothers, The Arcadian Wild, Mumford and Sons, Porch Dawg Revival, and the Jeff Little Trio.

To the brothers of Pyxus, playing music is fulfilling. They love seeing the looks of appreciation on the faces of audience members. To them, the connection between musician and listener is pure satisfaction. It ignites the fire to their dedication and determination to their craft.

To learn more about Pyxus, consider checking them out on facebook and give them a like! Go to the desired search engine and search www.facebook.com/pyxusmusic. Most video posts and event updates are posted on that page. But for a little taste, here they are performing their tune “Beauty In The Eyes Of The Beholder” check it out here.