The “Peerless” Past of Franklin County’s Steam Power 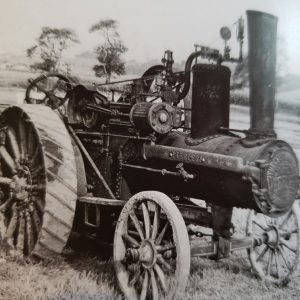 In the 1880s, Waynesboro was known for two steam engines, the Geiser Manufacturing Company’s “Peerless” steam engine and Frick Company’s “Eclipse.” To broaden their product line, Geiser later developed a steam-powered “Peerless” gang lplow to go along with the “New Peerless” thressing machines, hay presses, and sawmills that were already in the line.

This is an amazing part of the building of Franklin County and the contributions it made to early America.

The following is an excerpt from Geiser: A Waynesboro Industrial Icon’s History and Legacy puts the genius of Peter Geiser in perspective.

“In 1858, Peter (geiser) arranged with Georgbe Frick, operator of a small foundry and machine shop to build Geiser separators at his shop on his father’s farm in Ringgold Maryland. This would prove to be a long and successful association. Frick was an inventor and mechanical genius who was also destined to play a large, important part in the development of industrial Waynesboro. An agreement also was reached with Samuel Fitz to build threshers at his Hanover, Pennsylvania and Martinsburg, West Virginia shops. As business continued to expand, Daniel joined Peter to grow the trade.

During the following year, Frick built 20 machines in the Rigngold shop, and the four small shops involved in building Geiser equipment turned out a total of 111 units.”

Find out more about Waynesboro’s industrial history from the Waynesboro Industrial Museum by clicking here.