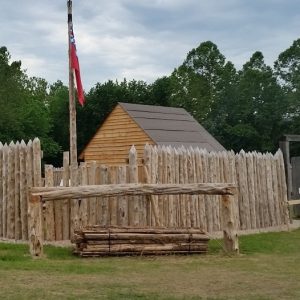 Franklin County was the site of private forts like Chambers Fort and Fort McCord as well as provincial forts like Fort Loudoun. The settlements sprang up on the Franklin County frontier from 1730 to 1755 on land that was traditionally used by Native tribes for hunting and foraging. Conflict arose between the Native tribes and the settlers, so the colonial settlers build fortifications around their homes and settlements to deter attacks.

Fort McCord was a private fort, near Edenville. On April 1, 1756, members of the Delaware tribe burned the fort, killing and taking captive 27 pioneers. Among the captives was Jean McCord Lowry. Her story of capture, captivity and ultimate release can be read here on the University of Oxford text archive.

Fort Loudoun was built in 1756 by the Pennsylvania Regiment. First is was used as a supply base for the Forbes Campaign. Popular history marks the Battle of Lexington and Concord on April 19, 1775. In fact, ten years earlier, the Black Boys Rebellion at Fort Loudoun was an earlier time of colonial rebellion. As Neil Swanson author of “The First Rebel” believes the seeds of colonial America’s discontent were sown at Fort Loudoun.

“The date that would be carved on the monument and printed in the histories and textbooks was April 19, 1775. On that day Americans would march out to face the British regulars across the village green in Lexington, Massachusetts. But, they would not be the first Americans to march out for that purpose. They would not be the first by ten years, one month and eleven days. The day on which James Smith’s three hundred men marched down the muddy road to Fort Loudoun was March 9, 1765.”