On the run for the murders of five pro slavery settlers in Kansas in 1856, abolitionist John Brown rented rooms in a boarding house in Chambersburg, Pennsylvania during the summer and fall of 1859 where he planned a raid on the Federal Arsenal at Harpers Ferry, Virginia. If his plan succeeded, he and his followers would collect enough guns to equip an army of slaves and incite them to rebel. If his plan failed, he would be hanged.

Brown married twice, and fathered 20 children. He moved frequently, became involved in many business ventures, and was forced to declare bankruptcy in the 1840s. Through it all, Brown supported the abolition of slavery and came to the conclusion that the only way to end slavery was to lead a war against it himself.

In May 1856, Brown, his sons, and a small band of sympathizers murdered five pro-slavery men in an event that is known as the Pottawatamie Massacre. Brown spent the next two years on the run while gathering money and arms for his cause. In the summer of 1859, Brown came to Chambersburg. Using the assumed name of Dr. Isaac Smith, Brown occupied a bedroom in the upstairs of Mary Ritner’s Boarding House on East King Street and planned his attack on the Federal Arsenal at Harpers Ferry.

During his stay in Chambersburg, Brown met with abolitionists including the famous anti-slavery author and lecturer Frederick Douglass. Even though Douglass was opposed to Brown’s plan to create a slave uprising, he met with Brown at an old stone quarry outside of Chambersburg in August 1859. Brown was unable to convince Douglass to join the raid on Harpers Ferry, and Douglass fled to Canada briefly to avoid being implicated in the raid.

Brown sent the weapons that he had been stockpiling in Chambersburg to the Kennedy farm. Just over the Maryland border, the Kennedy farm was close to Harper’s Ferry and it was the staging point for the attack.

On Sunday evening, October 16, 1859, Brown and 21 of his supporters slipped into Harpers Ferry. They seized the federal arsenal, killed seven men and injured about a dozen more. When news of the attack reached Richmond, the U. S. Marines rushed to Harpers Ferry and began shooting. Brown and the few of his men who were left barricaded themselves in a small brick building and refused to surrender. Finally, a company of Marines stormed the building and captured Brown and his men.

John Brown was tried, found guilty of murder, treason and inciting a slave insurrection. He was hanged, along with nine of his followers, on December 2, 1859 in Charles Town, Virginia. 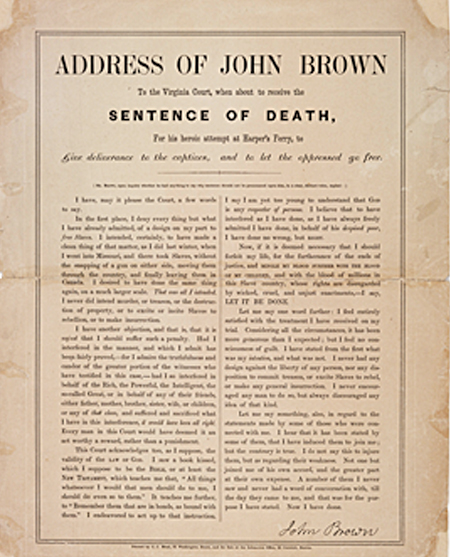 The address of John Brown after his sentence of death by the Virginia Court, 1859. 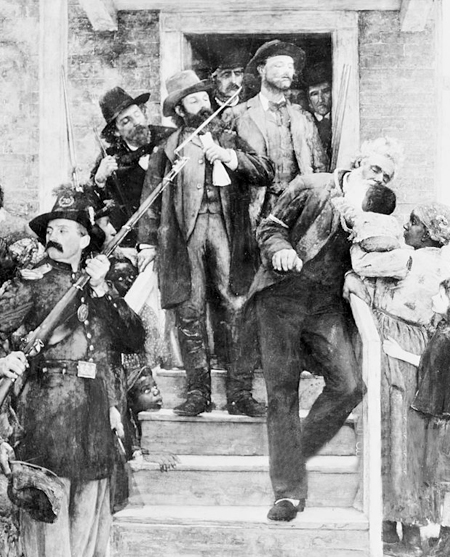 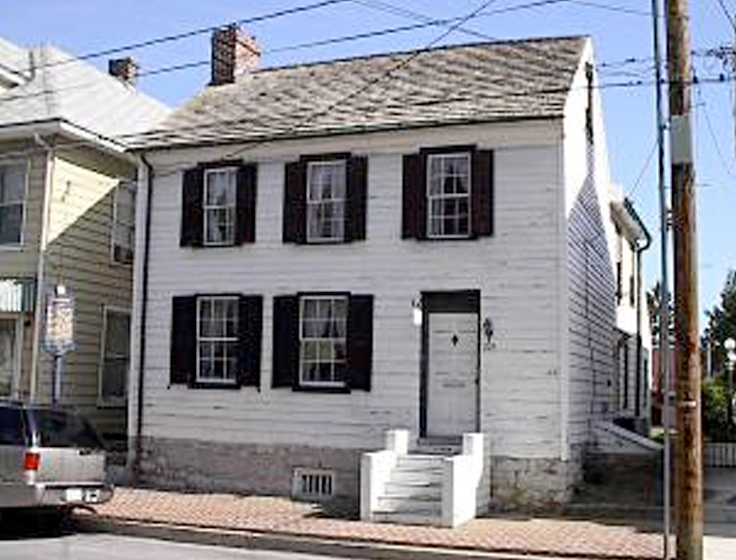