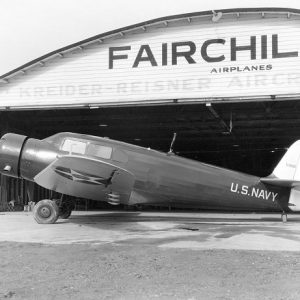 Allison-Antrim Museum’s “virtual” September speaker is Kurtis Meyers, a graduate of Greencastle-Antrim High School. Kurtis spoke to the Museum’s membership and the public in March 2005.  His presentation was “The Aviation Industry in Hagerstown:  The Post-war Years,” with emphasis placed on Fairchild.  Meyers’ first presentation, in May 1998, covered the aviation history in Hagerstown from 1916 – 1945.  Meyers is a leading authority on Fairchild and aviation in the Cumberland Valley.

Sherman Mills Fairchild was born in 1895, the only child of a congressman, who was also a founder of IBM.  The Fairchild Aviation Corporation was born out of Sherman’s interest in photography, specifically aerial photography.  Fairchild invented a camera in which the shutter was inside the lens.  Fairchild’s camera produced much clearer aerial photographs than the standard cameras of the day because the standard camera’s shutter speed was too slow compared to the speed at which planes flew.

Sherman Fairchild died March 28, 1971.  In March 1987, the long illustrious aircraft history of numerous Fairchild companies came to an end.  For over 60 years, the Fairchild name was associated with the design and manufacture of airplanes.

Allison-Antrim Museum, 365 South Ridge Avenue, Greencastle, PA 17225 is open “by appointment,” by calling 717-597-9010, Tuesday to Friday, noon to 4 pm and Saturday 11 am to 1 pm.  Masks are required. For more information, please visit: www.greencastlemuseum.org, daily on Facebook, or on Twitter @greencastlemuzm.