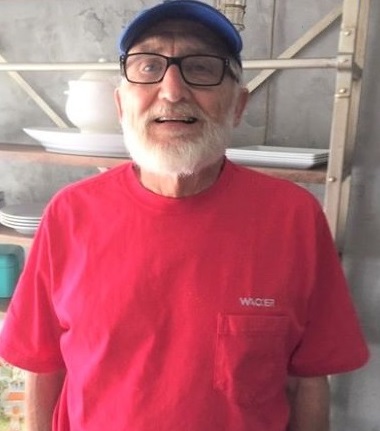 Pete Mason is as surprised as anyone to be retired and living the active volunteer life in Franklin County. Just a little more than five years ago, he was ready to enjoy restful days in his and his wife’s New Jersey home, on the outskirts of New York City. It was a long way from where he began.

Born and raised in Wisconsin, Pete says he remembers he couldn’t wait to leave. “They taught the three Rs – Reading, (w)Riting and Route 29 to Milwaukee.”  He went to college in Minnesota where he met his wife. They married a week after their graduation, then headed for Milwaukee. “I worked for First Wisconsin National Bank for a few years and [eventually] got a job at a company called Wacker-Neuson and they transferred me to New Jersey, which was a terrific culture shock.”

As a sales manager in the Northeast, Pete traveled and discovered a lifelong interest. “I’m a history nut!  In my job, I left on Monday and came back Friday.  Whatever town I was in – Boston, Buffalo, Pittsburgh – I was usually with one sales person and we would go out at night to check out the area, look for the history of the area, discover what made people tick, and determine why they would buy something from us.  In different markets, the various ways people do things is interesting.”

At 68½ years old, Pete decided to retire.  The couple had no further plans, but they began looking at their retirement income and the taxes in New Jersey.  “We had some friends that lived here [Penn National] and they had a New Year’s party.  We didn’t know where this was, but went to the party.  We liked the area, bought a lot, built a house and now we’re happy.  In fact, we just celebrated our 50th wedding anniversary a month ago and we had our motto put on the cake ‘Who’d of thought?’

The itch to learn more about an area was one of the reasons Pete became a CTA. His best experience was accompanying a bus tour as a guide. The tour made a stop at Monterrey Pass. “I was really excited about it; it was a lot of fun.  I studied up.  The people on the tour had no idea the magnitude of what happened with this part of the retreat [after the battle of Gettysburg], the battle between the two armies there or the part George Armstrong Custer played in the battle.  Approximately 10,000 soldiers fought on that little narrow road.  The new one room museum is very nice.  It’s surprising, but Monterrey Pass is one of the best kept secrets around.”

What’s next on his list as a CTA?  “Janet [Pollard] wants me to take the test [Gettysburg battlefield guide exam], which isn’t until next year.  I might just do it for my own interest. It’s on my bucket list.

Special thanks to CTA Dianna Heim,Director of Strategic Relationship Development, for contributing this CTA spotlight.