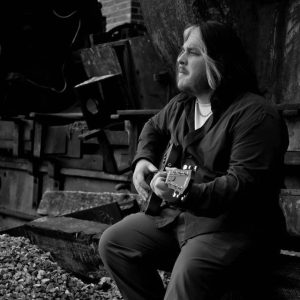 On this week of Music Spotlight, another fine Franklin County musician and singer stands in the spotlight; meet Mr. Drew Adams.

A Waynesboro native, Drew Adams is a freelance musician who has been part of the live music scene in the area for many years. His axe of choice is the bass guitar. On the other hand, when he is playing solo or with another musician, he can be seen strumming the six strings of his Taylor T5 acoustic electric guitar. Drew has also filled in on drums from time to time for numerous musicians and bands. Currently, Adams plays in the band Sundog Ritual, On Tap Duo, and under the name of Drew Adams Acoustic when performing solo. Back in 2006, Drew also graduated from the AudioWorks Program at the Sheffield Institute for the Recording Arts in Phoenix, MD.

Rock music of the 1990s is the driving force behind Drew’s musical motivations. For him, there was just something about the music and its characteristics during the decade. Rock music was dramatically changing. Punk rock, the grunge movement, and 90s alternative rock were blossoming with unique artists and bands. According to Adams, Weezer, REM, and Harvey Danger are just a handful of the bands that grabbed his attention the most. The most notable influence would be Green Day. Green Day was a band that was redefining punk rock and music composition all throughout the decade and into the early 2000s.

Drew’s musical influences are not limited to the 90s rock movements, however. As a true music lover and cover musician, he very much enjoys music from decades past. He certainly appreciates big hit bands and songs from the late 1970s and early 80s. The Knack is one such band between those time periods that captivated Drew. During a performance from this man, listeners will also catch a few tunes from the 40s, the 50s, and even a few songs from the late 1800s!

What does Drew get out of doing music? According to him, “music is a great release from the stresses and day-to-day concerns endured every day. It’s also a healthy way to take one’s mind off things that usually end up being not as big of a day as we thought they were.” Sometimes he will be minding his business in public and then the perfect song comes on somewhere around him. Immediately afterwards, all weight upon his shoulders gently slides right off and onto the ground. That situation is what Drew hopes to provide to those listening to his performances. For him, leaving a gig and receiving praise and “thank yous” from listeners is more than fulfilling. Ultimately, to be able to perform for a living is a dream. It also keeps him busy between carrying out marketing tasks and goals as well as focusing on music production and editing. It’s a never ending cycle of imagination and creativity.

At the moment, Drew Adams is working on building his YouTube page. For the time being, he can be found on Facebook by searching “Drew Adams” where he posts gig updates and all things music related!