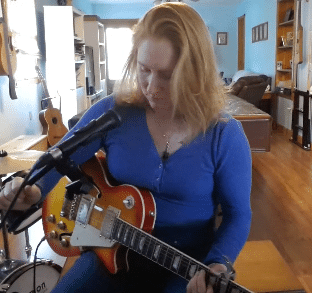 Hailing from Newport, PA, Holly is a physical therapist by day. She serves the community through her work at UPMC Harrisburg Hospital, specifically in the medical surgical ICU. Through the course of her day, Holly sees much suffering. All of the suffering can build up and overwhelm some one working in the healthcare sector. The way in which frontline healthcare workers cope can vary from person to person. For Holly music provides her a way to cope with the stresses endured throughout the workday.

Like a few of the other Music Spotlight features, Holly enjoys pressing the envelope with her cover songs. With each song, she makes an honest attempt to put her own signature on each tune she plays. The same idea is applied to her originals. Holly’s originals are the perfect marriage of blues and rock. More specifically, her voice carries the soul-filled nature exhibited through blues music. Then her guitar and playing style carries out that rock n roll rhythm that makes you want to bob your head. Something that sets her apart from the other Music Spotlight features would be her use of the “looper” pedal. The looper pedal is a pedal that records a desired segment of playing and repeats it back to the musician, allowing them to add layer after layer to their performance. This particular piece of equipment has also helped Holly define her sound and pull inspiration to continue making music.

To hear more of Holly Gouse’s work, you can find her on Facebook as well as on YouTube by searching “Holly G”.

Check out her cover of House of the Rising Sun here!