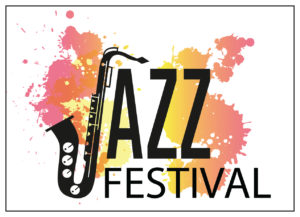 Renfrew Institute’s 28th annual Jazz Festival is scheduled for Sunday, August 25, from 2:00 to 4:00 p.m. on the lawn behind the Renfrew Museum house in Waynesboro, Pa. The concert features world-renowned musicians and is offered free to the public.

“Each of these artists is an internationally renowned jazz musician,” said event organizer, Andrew Sussman. “This concert is an opportunity to hear these stellar jazz artists for free in beautiful Renfrew Park!”

Lead sponsor, FirstEnergy Foundation on behalf of West Penn Power, is returning this year to support the event. “We are proud to help sponsor this marvelous concert that brings extraordinarily talented jazz musicians and vocalists to our backyard for our customers and others to enjoy,” said John Rea, Regional President of West Penn Power.

Jeff “Tain” Watts spent his formative years with Wynton and Branford Marsalis, and his compositional skills now command equal attention, earning Watts a Guggenheim Fellowship in 2017. Watts initially majored in classical percussion at Pittsburgh’s Duquesne University, where he was primarily a timpanist, followed by enrollment at the Berklee School of Music. He joined the Wynton Marsalis Quartet in 1981 and proceeded to win three Grammy Awards with the ensemble: Black Codes From The Underground, J Mood and Marsalis Standard Time.

Watts left Wynton Marsalis in 1988. After working with George Benson, Harry Connick, Jr. and McCoy Tyner, he joined the Branford Marsalis Quartet in 1989, winning Grammys for “I Heard You Twice the First Time” and “Contemporary Jazz.”  In the film and television industry Watts has appeared as both a musician on the Tonight Show with Jay Leno and as an actor, Rhythm Jones in Spike Lee’s “Mo Better Blues.” He joined Kenny Garrett’s band after returning to New York in 1995 and continued to record and tour with Branford Marsalis as well as Danilo Perez, Michael Brecker, Betty Carter, Kenny Kirkland, Courtney Pine, Geri Allen, Alice Coltrane, Greg Osby, McCoy Tyner, Steve Coleman, Gonzalo Rubalcaba, Harry Connick, Jr., and Ravi Coltrane.  http://www.tainish.com/

Grégoire Maret (harmonica) is one of the most sought after harmonica players in the world. Often compared to legends Toots Thielemans and Stevie Wonder, he has been asked to play with an incredible number of famous musicians including Youss N’Dour, Meshell Ndegeocello, Pete Seeger, David Sanborn, George Benson, and Cassandra Wilson, to name a few. In 2003 he was the subject of Swiss filmmaker Frédéric Baillif’s documentary, Sideman, which won several awards. In 2005, Grégoire toured with the Pat Metheny Group, receiving a Grammy for Best Contemporary Jazz Album for their album “The Way Up.” He also won the Jazz Journalists Association ‘Player of the Year Award.’

Bollenback performed on over 80 recordings as a sideman, and has released eight CDs as a leader.  A busy performance schedule has been augmented since the late ’90s by steady jazz education duties at Columbia University, Queens College, and The New School. Bollenback is also a composer whose pieces have appeared on Joey DeFrancesco’s Reboppin’ and on the Jazz Times Superband CD.  His most recent recording, Portraits in Space and Time (Mayimba Music), with his trio, was released in 2014. Bollenback resides in the New York City area.

Orlando le Fleming (bass) is counted among the most proficient and accomplished bassists in the field of contemporary jazz. His facility as an improviser and capacity as a team player were first honed not on the bandstand, nor in the practice room, but on the cricket pitch. Originally from the UK, Orlando seemed destined for an athletic career, and was briefly a professional cricketer, until he was granted a place at London’s Royal Academy of Music, and his lifelong passion for music won out. Le Fleming’s 2003 move to New York City was a timely one. Soon after arriving stateside, Le Fleming joined Jane Monheit’s band, consequently sharing the bass duties on her 2004 release Taking a Chance on Love with Ron Carter and Christian McBride; the year following, he recorded with jazz legend Jimmy Cobb on his Marsalis Music Honors release. Greatly in demand, he has worked with Branford Marsalis, Leslie Odom, Jr., Wayne Krantz, Joey Calderazzo, Bill Charlap, Billy Cobham, Jeff “Tain” Watts, and David Sanchez among others. His latest endeavor as a leader, Romantic Funk, presents a pastiche of classic fusion sounds and ideas, updated by Le Fleming’s signature palette of polyrhythm and abstract exploration.

Parking is available behind the visitors center, with additional parking in the lower lot off Welty Road. Those attending are encouraged to bring lawn chairs and blankets, and picnics are welcome. Rain site: Waynesboro Area Middle School auditorium.

For more information call Renfrew Institute at 717-762-0373, or visit www.renfrewinstitute.org.