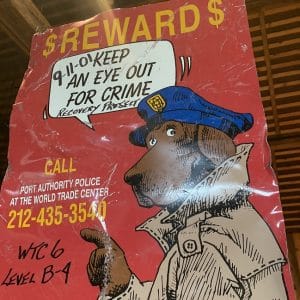 September 11, 2021 marks the 2oth anniversary of the attack of the World Trade Center.

Allison-Antrim Museum is hosting Remembering September 11th to honor the memory of 2,977 victims – the heroes and the innocents, who lost their lives on September 11, 2001.

No student today, K-12, has memories of September 11, 2001. Their connection to 9/11 is the aftermath, through which they have lived every day. All they know about September 11, 2001, is what they read in books or about what they hear their family members talk.

The exhibit displays the artwork created by GAHS students, in September 2001 and one year later in 2002. The teenagers’ art pieces are intense and insightful, with the raw feelings that reflect and say what everyone felt. These students are now 36 to 38 years of age. Introducing the exhibit is a special donation to Allison Antrim Museume’s September 11 collection – a 9-11-01 red, metal Port Authority recovery project sign, which was used in World Trade Center 6, Level B-4.

Also, included in the exhibition are three large archival scrapbooks of newspaper articles from the 10 years that chronicle the timeline of events beginning September 11, 2001, through August 2011. The Front pages from some local, state, and national newspapers are, also, exhibited. Among the books on the events of September 11, that that visitors may peruse, is Portraits, a compilation of the daily New York Times’ Portraits of Grief column, published until all the September 11 victims were recognized. A photograph and 200-word essay that captures the essence of each person was the Times’ way of honoring each victim and allowing the world to put a face and meaning with each life – they are no longer just a number between one and three thousand.

Framed prints of Norman Rockwell’s Four Freedoms – Freedom of Speech and Worship and Freedom from Want and Fear, purchased by AAMI in 2002, are displayed. The original Rockwell canvasses, which toured the country for the WWII War Bond effort, were inspired by Franklin Roosevelt’s Four Freedoms speech. $133 million dollars’ worth of bonds were sold.

Photographs of how people and businesses in the Greencastle-Antrim area responded are, also, exhibited. One unusual piece in the exhibit is a comic book. The creators of all the superheroes paid tribute to the real heroes in this September 2001 magazine, not the imaginary ones they have created in their minds for their comic strips. A journal begun in September 2001, which records the thoughts of AAMI visitors about that infamous day, will be available for reading and writing one’s 2021, 20-year, retrospective thoughts. One of the accounts shared was by Rev. Anna Straight, pastor at the Greencastle Presbyterian Church in September 2001. In it she shared her email correspondence with Rev. Jon Walton, pastor of the First Presbyterian Church in NYC. In the email, he spoke about the first plane flying, very low over the church, just seconds before it hit the first Tower. “The First 24 Hours,” a video will play in the background.

The Museum is regularly open Tuesday through Friday from noon – 4 pm and on Saturday, 11 am to 1 pm. For more information, please visit the website at www.greencastlemuseum.org, on Facebook, on Twitter @greencastlemuzm, on Instagram @allison_antrim, or call the museum at 717-597-9010. There is no charge for admission, but donations are appreciated.