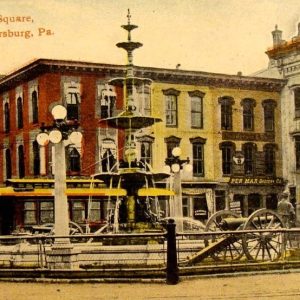 Memorial Fountain in the center of Chambersburg is beautiful. It sits on the convergence of two major highways, Route 11 and Route 30—the Molly Pitcher Highway and the Lincoln Highway.

The Memorial Fountain has been standing, on the “diamond” since 1878, to honor the men who fought in the Civil War and as an enduring symbol of rebirth. The cast iron fountain is 26 feet tall and 30 feet wide, with five basins. Eight cast iron posts in the shape of cannon barrels were made at T.B. Wood and Company foundry, weighing 600 pounds each. On March 13, 1968, the fountain received extensive damage when the upper four basins collapsed due to heavy snow and strong winds.

In 1977, a restoration was made for the preservation of the fountain that cost nearly $50,000. The fountain was placed on the list of Pennsylvania Historic Places and in May 1978, was also added to the National Register of Historic Places.

Chambersburg was the only town north of the Mason-Dixon Line to be burned during the Civil War. The soldier that stands at the fountain represents the faithful Union soldier guarding the southern gate of the fountain.